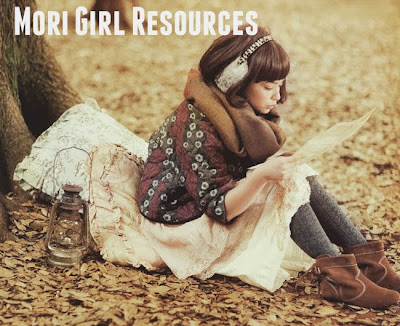 This post will not be anything mind-blowing and will be relatively short at that. Most Mori Girls probably already know of most of these places I am going to share with you, but nevertheless, I think it can be helpful to new Mori Girls. So here goes! My favorite Mori Girl resources on the web!

Tumblr is probably one of the best places for Mori Girl inspiration. The Mori Girl tag is filled with lots of inspiration! And by browsing the Mori Girl or Mori Kei tags, you'll often run into many Mori folks personal tumblrs.

Forest of Secrets is a relatively new tumblr, but is one of my personal favorites. People are encouraged to send in their opinions, and stories about being Mori Girl. Those stories will be posted anonymously so that you can share your opinion without the fear of being judged. They've had a good number of people sharing so far, and it's interesting to see what goes on in other Mori Girls worlds. (Update: Forest of Secrets is now inactive. You can find a similar tumblr here.)

My favorite way to find Mori inspiration is through pinterest. If you haven't heard of Pinterest, it's basically an online bulletin board. You can find pictures, recipes, crafts, etc. that you like and "pin" them virtually to a virtual "board". There are hundreds of different Mori Girl boards! And all it takes to find them is a quick search. My own personal board is here.

Mori Girl magazines, having pretty much started the style, are very good resources as well. But, not being in Japan, and some of them being out of print, how are we to get our hands on them? No worries! Some amazing people in the Mori community have scanned them in so that you, oh foreigner, can take a look at them. Mori ideas straight from Japan are always my favorite, so I myself am very grateful for these scans! You can find a few here, and here. (Update: I have created a mori magazine archive here.)

Also, as listed in my last post, Mori Girl bloggers and Livejournal are both good ways to find Mori resources.

Hopefully this was a helpful post to you. And good luck venturing into the forest!

Posted by Kathryn at 9:43 AM No comments: