How "Mori" are you?: A just for fun Mori Girl quiz!

So I recently came across a Lolita Level Up quiz and I thought it might be fun if I made one for Mori Kei as well. Please keep in mind that this is totally just for fun, and is in no way meant to be an accurate judge of how "mori" you really are. I tried to keep the questions mostly related to the fashion, and the things that are widely accepted as being a part of a mori lifestyle. If you have any ideas for a point you think I might have missed, or one you think should be removed, please let me know! Also, feel free to repost this wherever, just please send me a link, or link back to me, as I'd like to see your results.

Now, on to the quiz!

1-18: You're a Forest Admirer!
You've probably just discovered Mori and are giving it a look to see if it's something you're interested in, or maybe you've just started wearing Mori. Either way, welcome to the forest deer!

19-36: You're Tiptoeing Through the Tulips!
You're probably a newbie to Mori, but you know at least the basics of the fashion. You've also probably made your first coordinate, or are working on one.

37-54: You're a Forest Sapling!
You've probably been wearing Mori for a little while. You most likely know your way around the fashion pretty well, and are at least semi-serious about it.

55-72: You're a Delightful Deer!
You've probably been wearing Mori for at least a year, or you really liked the fashion and jumped in head first! You know your way around the fashion well now, and you've probably helped out others in the fashion. You're probably also living a somewhat Mori lifestyle as well.

73-90: You're a Full-time Forest Friend!
You're most likely an experienced, full-time Mori Girl. You've probably also been into the fashion for a good while. It's also my guess that there is a good chance you were dressing and/or living like a Mori girl before you even knew it had a name!

91+ You're a Real Life Forest Nymph!
Are you Choco? You must really really love Mori to score this high! You're most likely the real-life embodiment of the ideal Mori Girl. Congratulations my deer!

I hope you enjoyed this quiz! I'm a Full-time Forest Friend myself! How did you score? I hope you'll let me know!

And Yet Another Outfit Dump.

Outfit's again. As always pretty much everything is thrifted, so I won't put any rundowns. I post my outfit snaps on my instagram, @forestsandtea, if you're interested. Enjoy! 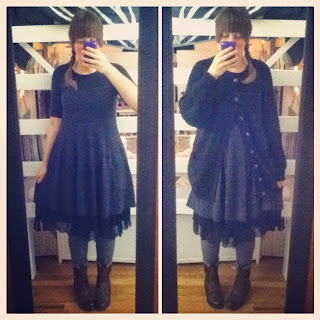 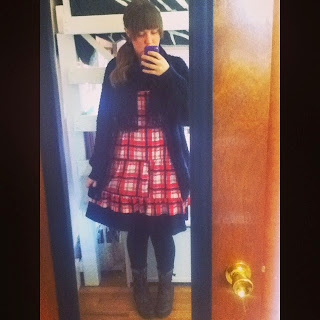 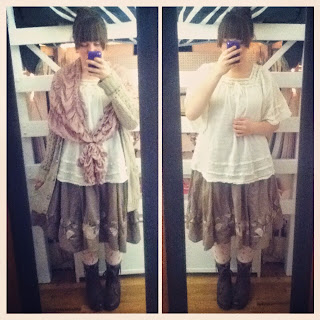 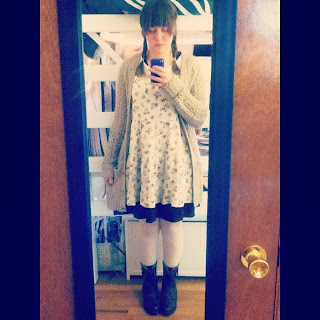 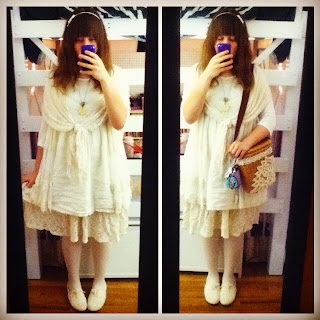 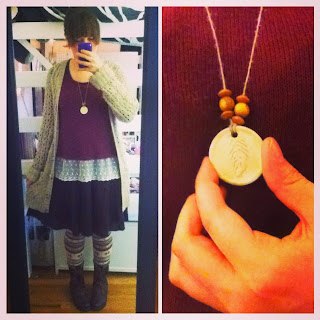 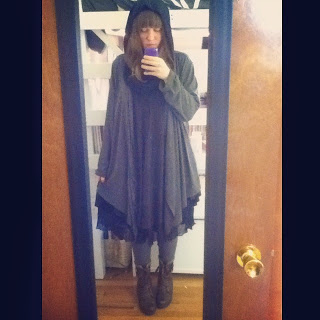 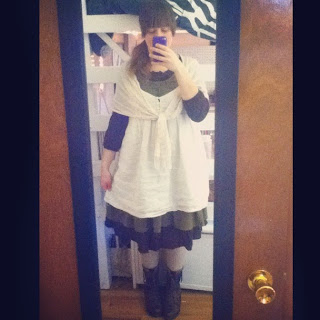 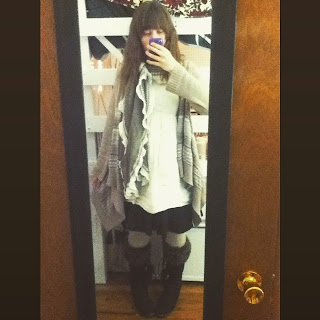 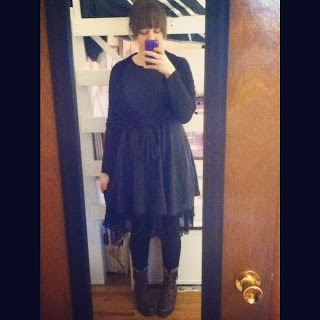 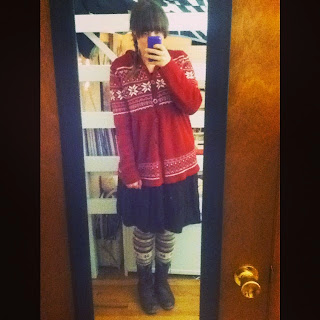 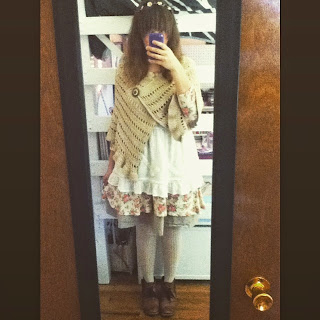 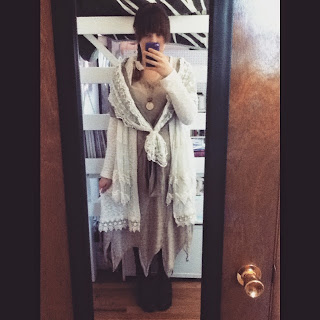 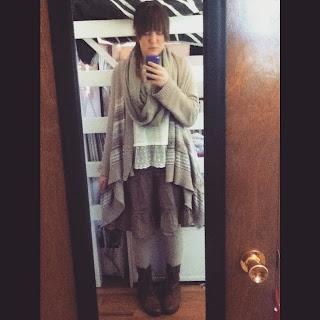 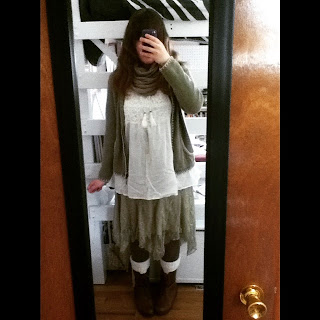 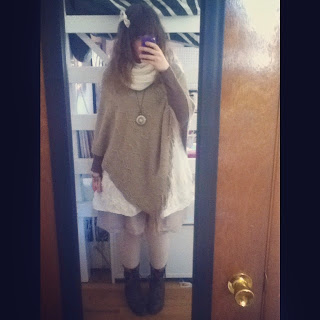 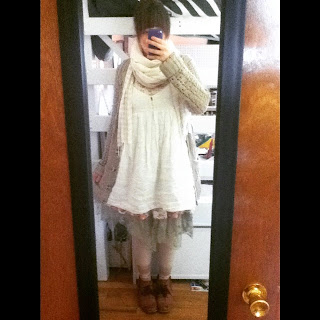 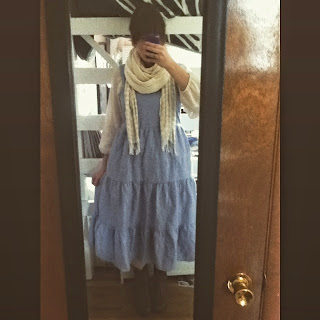 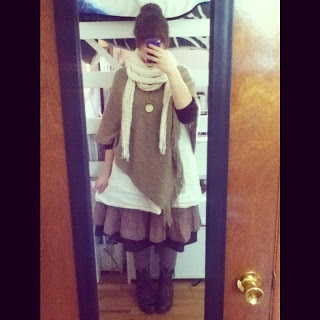 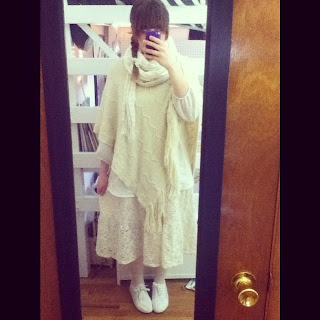 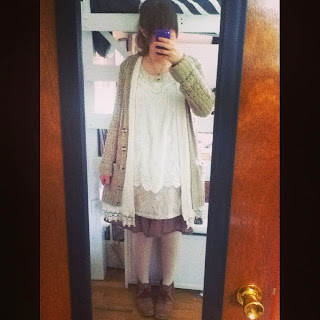 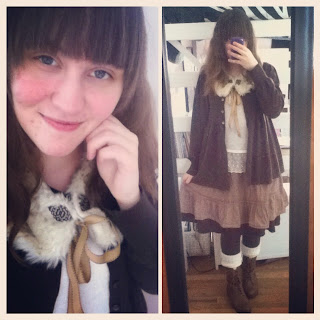 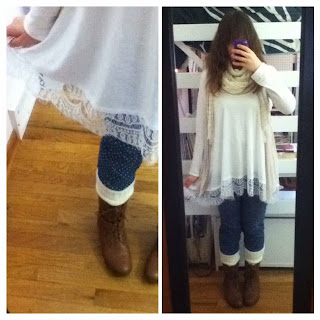 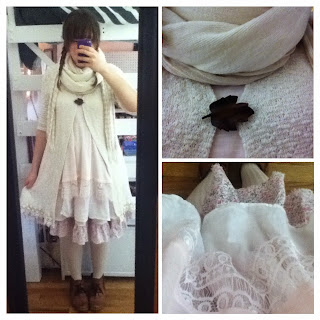 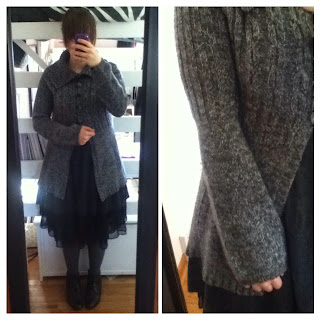 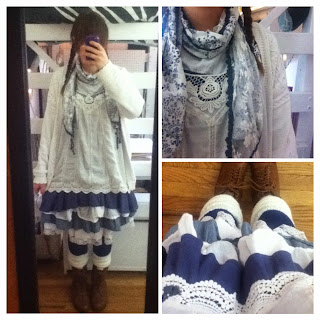 Email ThisBlogThis!Share to TwitterShare to FacebookShare to Pinterest
Labels: outfits

Recently a lovely deer from the Mori Facebook group, Jasmine (you can find her blog here), created something called the "Mori Girl Challenge". This set of challenges is not competitive, and you can go at your own pace. And there is something for everyone as she graciously thought to make 4 different lists. They each have the same general themes, but are geared towards different activities. Between Drawing, Photography, Cooking and Writing, there is a little something for everyone! She kindly let me display the lists here for you, so that all you Mori folk have a chance to see it. So here are the lists:

DRAW
1. Comfort Food: Draw a picture of/including your favorite foods and snacks.
2. Mind Garden: Draw a meditative garden from your imagination.
3. Furry Friends: Draw your favorite forest creature(s).
4. Goblin King: Draw your interpretation of a/the Goblin King.
5. Memento Mori: Draw a portrait inspired by vintage memento mori photographs.
6. Mushroom Mushroom: Draw a picture of/including mushrooms.
7. Winter Mori: Draw a winter mori picture.
8. Summer Mori: Design a mori girl swimsuit.
9. Traditional: Draw a mori outfit inspired by your countries traditional national dress.
10. Favourite Colour: Draw a picture with a color palette comprised of your favorite colors.
11. Least Favorite Color: Draw a picture with your least favorite colors.
12. Flight: Draw something from a birds-eye perspective.
13. Float: Capture a lake/canal/ocean scene.
14. Fairy Tale: Reinvent your favorite fairy tale(s) with a mori twist.
15. Music: Listen to a song and paint/draw what you feel.
16. Exotic: Draw a mori girl in a different culture from your own (e.g. a British mori-girl creates a
Chinese mori-girl).
17. Paper: Make a collage or do dêcoupage.
18. Fruity: Draw a bunch of fruits or a fruit inspired picture.
19. Little Blessings: Draw something with a religious theme/motif.
20. Down the Rabbit Hole: Draw a mori version of Alice in Wonderland.
21. Japan: Draw a mori-girl Kimono.
22. Vintage: Draw a vintage style mori-girl.
23. Editorial: Draw a mori-magazine front cover.
24. School days: Design a mori-girl school uniform.
25. Bento: Draw a bento lunch.
26. Back to the Future: Draw what you think a futuristic mori-girl fashion would look like.
27. Little Things: Draw tiny creatures really huge, or big creatures really tiny.
28. Sleepy: Draw a sleepy mori-girl.
29. Annoying: Draw something that annoys you or that you think would annoy mori-girls.
30. Meme: Convert a regular meme into a mori meme.
31. Victory!: You just completed the Mori-Challenge, so draw yourself celebrating.

SNAP!
1. Comfort Food: Photograph food(s) you love.
2. Mind Garden: Create a photo collage of gardens and flowers.
3. Furry Friends: Photograph different textures of fur and feathers.
4. Goblin King: Take a photo of a place where you would imagine a Goblin King hangs out.
5. Memento Mori: Take a portrait or selfie recreating the style of Victorian Memento Mori.
6. Mushroom Mushroom: Take pictures of mushrooms.
7. Winter Mori: Photograph the accessories/coord you would wear during the winter.
8. Summer Mori: Create a photo collage of ‘summer colored’ flowers.
9. Traditional: Photograph something that would be considered traditional in your culture.
10. Favorite Color: Snap things that are you favorite color, put them together in a spectrum.
11. Least Favorite Color: Photograph a color your dislike but make it beautiful!
12. Flight: Photograph birds and eggs and feathers.
13. Float: Photograph leaves and creatures swimming or floating.
14. Fairy Tale: Snap a landscape/scene which reminds you of a fairytale.
15. Music: Listen to a song and capture it in a photo.
16. Exotic: Capture a flower or food item that looks exotic.
17. Paper: Photograph books and pages.
18. Fruity: Take up-close pictures of fruits and vegetables, capture the different textures.
19. Little Blessings: Capture a Holy place or a peaceful spot where a person could say prayers.
20. Down the Rabbit Hole: Capture something Topsy Turvy like Alice in Wonderland.
21. Japan: Capture a picture that resonates with the theme Japan.
22. Vintage: Capture something with vintage filters on.
23. Editorial: Create a photo-spread to appear in a Mori Magazine.
24. School days: Take a photo of your old school or something you associated with childhood
schooldays.
25. Bento: Take photos of lunchboxes or a lunchbox meal.
26. Back to the Future: Capture trees and modern looking buildings or collage the two themes.
27. Little Things: Experiment with size and perspective to make little things look big & vice versa.
28. Sleepy: Photograph your bed (neatly made or messed up with plushies & pillows everywhere).
29. Annoying: Snap what annoys you with doodles/google eyes on to make them less annoying.
30. Meme: Complete a meme/challenge but with a mori twist (e.g. mori troll face etc).
31. Victory!: Take a selfie with a big smile, you just completed the Mori Challenge.

WRITE
1. Comfort Food: Write about eating or preparing a meal.
2. Mind Garden: Describe your dream garden.
3. Furry Friends: Write a short adventure with an animal companion.
4. Goblin King: Write a list of demands the Goblin King would make.
5. Memento Mori: Write about a photographer taking a memento mori photo.
6. Mushroom Mushroom: Write about magical wish-granting mushrooms (not original I know).
7. Winter Mori: Write a winter mori adventure (would you go in the snow or stay in the lodge?).
8. Summer Mori: Write about a journey through a sandy desert.
9. Traditional: Write an information piece about a cultural artifact/tradition from your country.
10. Favorite Color: Write something titled “[your favorite color]”.
11. Least Favorite Color: Create a character who has a fear of your least favorite color.
12. Flight: Write about a birds flight to a wonderful new land.
13. Float: Write a story that beings or ends with the main character floating.
14. Fairy Tale: Write an unexpected alternate ending to your favorite fairy tale.
15. Music: Write a song!
16. Exotic: Create an exotic character.
17. Paper: Decorate writing paper or write quotes from a book you love.
18. Fruity: Write as much as you can about every fruit you can think of.
19. Little Blessings: Write about the little blessings in your life and remember to appreciate them.
20. Down the Rabbit Hole: Write about what Alice sees as she falls down the rabbit hole.
21. Japan: Write about all you’d see/do on a trip to Japan.
22. Vintage: Write about your past life during the vintage era.
23. Editorial: Write an article for the “Mori Messenger”, a mori girl newspaper.
24. School days: Write about your first day in a new school.
25. Bento: Write a recipe for a bento box.
26. Back to the Future: Write about a forest on the moon and plants that grow there.
27. Little Things: Write a story about what would happen if you pet was 20x its regular size.
28. Sleepy: Write about your strangest/favorite/scariest dream.
29. Annoying: Write about the most annoying day ever (real or fictional) but have a happy ending.
30. Meme: Complete the mori blog challenge, or a list of personal facts meme.
31. Victory!: Make yourself a “Congratulations you did the Mori Challenge” certificate to award
yourself.

COOK!
1. Comfort Food: Create a special mori-inspire dish.
2. Mind Garden: Create a dish inspired by flowers.
3. Furry Friends: Make a treat for an animal friend (pet or wild birds).
4. Goblin King: Make a dish you would offer to appease the angry Goblin King.
5. Memento Mori: Make a dish your grandparents/great grandparents ate in their youth.
6. Mushroom Mushroom: Make stuffed mushrooms.
7. Winter Mori: Cook a dish with winter vegetables (and meat if you aren’t vegetarian).
8. Summer Mori: Make mori-flavor ice cream.
9. Traditional: Cook a traditional meal associated with your country.
10. Favorite Color: Make a meal with your favorite colors in it.
11. Least Favorite Color: Incorporate your least favorite colors in a meal and make it delicious.
12. Flight: Make a light meal (think pavlova and puff pastries!)
13. Float: Create an ice cream float with a mori twist.
14. Fairy Tale: Make a meal that is in a fairytale (e.g. Grandmas picnic basket in Little Red Riding
Hood or a Gingerbread house).
15. Music: Make a meal based on a song with food in its name (e.g. Candy Candy Candy).
16. Exotic:Cook an exotic dish you imagine a forest girl in a far off land eating.
17. Paper: Make paper-thin crepês with yummy fillings.
18. Fruity: Make animals and shapes out of fruit.
19. Little Blessings: Make a dish associated with religion (e.g. try Kosher food).
20. Down the Rabbit Hole: Make a topsy-turvy cake and have a Merry Unbirthday.
21. Japan: Cook a Japanese dish.
22. Vintage: Make a dish you would imagine appeared on a 1950's diner menu.
23. Editorial: Make a recipe for the Mori Messenger (a made-up mori magazine).
24. School days: Recreate an old school dinner but make it healthier/yummier.
25. Bento: Make a mori themed bento box lunch.
26. Back to the Future: Create a meal for an astronaut that has just returned to Earth.
27. Little Things: Make a meal using only mini foods (e.g. baby carrots, tiny potatoes, mini corn).
28. Sleepy: Make a midnight feast and then stay up late to eat it.
29. Annoying: Try and cook a dish you struggle with, hopefully you will do it better!
30. Meme: Create a kitchen meme e.g. socially awkward spaghetti or grumpy kettle etc.
31. Victory!: Order take-out, you’ve cooked enough!!!

I will be completing the Snap, and Draw challenges myself. You can check out my instagram, @forestsandtea, if you're interested in seeing my progress. I hope to see lots of other Mori friends completing these challenges as well. And if you decide to do the Mori challenge, please let me know! I'd love to follow your progress as well!