I can remember clearly the first time I wore mori kei. I had only discovered it a month prior, and it had taken only a few weeks for me to convince my mom to help me remake my wardrobe. We spent hours looking through thrift stores, not quite knowing what we were looking for and buying everything we thought might work. After hours of blind shopping I had somewhat assembled a wardrobe, and I was eager to create outfits. I spent hours mixing and matching my pieces, and I came up with several outfits I was happy with. (Although looking back, there were all really awful.)

Up until that point in my life, I had only worn t-shirts, jeans with holes in the knees, and worn-out converse shoes. That was my wardrobe, and I had never experimented with fashion (besides a weird phase in middle school where I wore fingerless leather gloves all the time, and dyed a large strip of my hair pink). So the idea of going out in public in such a unique style as mori was a bit daunting to me. I spent a whole month with my mori clothing just sitting in my closet, and debating whether or not I really wanted to do this. I thought about where would be the best place to wear mori and get the least amount of stares from people, I wondered whether it would be better or worse to make my debut around people I knew or strangers, and, above all, I wondered whether I would have the courage to share my outfits with the mori community (which at the time was the morigirls livejournal page). In the end, my love for the fashion won out, and I decided to wear my first outfit on a family outing with some relatives who were visiting from out of town.

In hindsight, I'm not sure how I ever thought that was the best idea because my relatives are very modern and trendy. They are basically everything mori is not. But I did it anyways, and tried not to feel too weird under their glances towards me, and tried not to blush when they asked me questions about my sudden change in style. 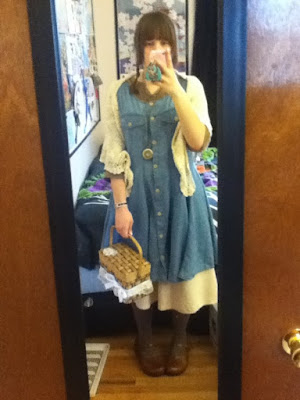 This was my first outfit. Looking at it now, it's really not that great (especially the wonky skirt). But in that moment, I felt beautiful, at home, and for the very first time, comfortable in my skin despite my relatives thinking I was weird. I knew then that I truly wanted to be a mori girl.

And now, almost four years later, I'm still wearing mori. I wear it almost every day really. My classmates recognize me by it, my friends make kind hearted jokes about their "favorite mori", and my family members still try to buy me anything with lace on it because "isn't this mori?" Mori still feels as much like home to me as it did the first time I saw a picture of a model wearing, and I suspect it will remain that way for quite some time to come.

So tell me, when was the first time you wore mori? Was it a good experience, a bad one? I'd love to hear your stories! Until next time my deers!