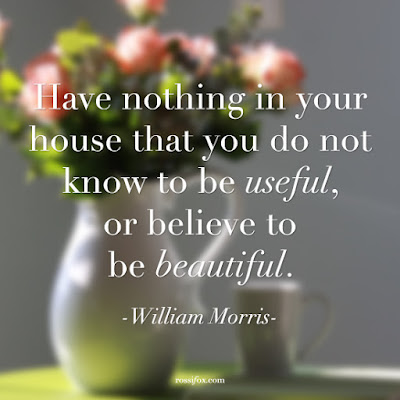 Hello everyone! I know I posted the intro post for this series quite a while ago, but life seemed to keep getting in the way and I was unable to get this post finished to my liking until now. Anyways, better late then never. Right? ^^;

For this first post in my Mori Kei and Minimalism series, I want to talk about decorating your home. The standard idea for a minimalist's home is all about living with only what you need. Don't buy unnecessary stuff, don't hold on to clutter, etc. This can be a hard concept for mori folk. I see a lot of mori folk who have large collections of nature things, or lace-y things, and or other things of that nature. The general idea that one thinks of when referring to a "mori home" is one that is filled to the brim with old, homey things, like an old grandmother's cottage, or an eclectic relative's apartment. And while that does fit the mori aesthetic, it is pretty much the opposite of what minimalism is. It's all about extra, instead of less. 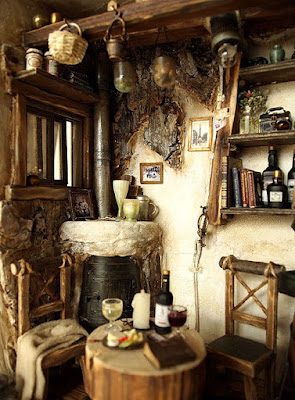 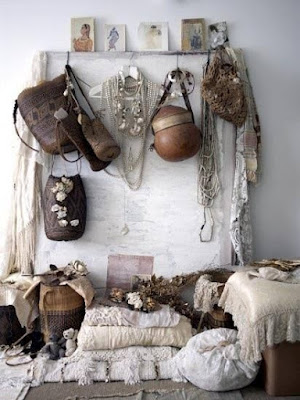 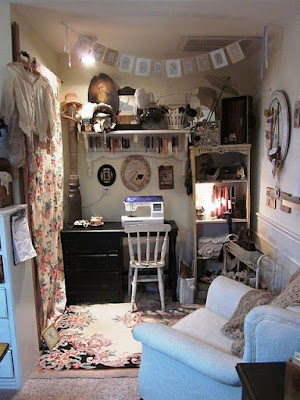 In addition to this cluttered idea of a "mori home" being opposite of minimalism, people also have a lot of ideas about what the decor of a minimalist home should look like. The typical minimalist home, in most people's minds, probably looks something like this: 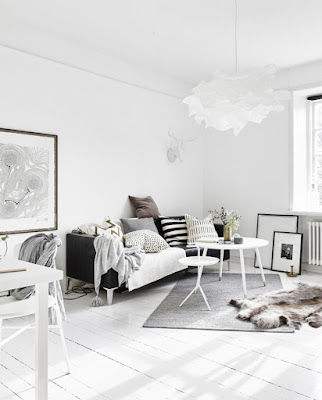 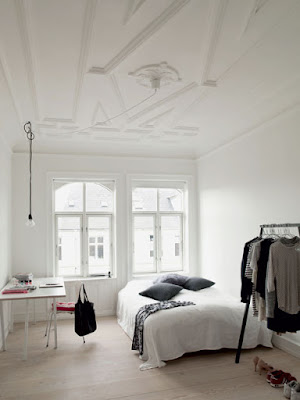 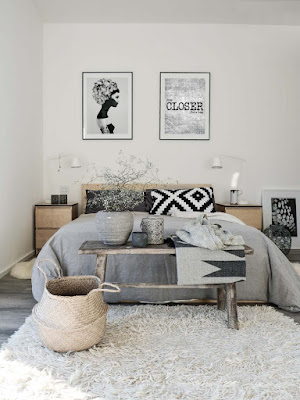 Generally, people think of blacks, whites, and grays. Large areas with no decorations are common, and overall it tends to be a more industrial look. So, if this is the "standard minimalist home", does that mean that a mori folk can't have a minimalist home and a mori home at the same time? I don't think so. Because although, typically, a minimalist's home looks one way, it doesn't mean that it always has to be these set colors and styles.

It is important to note that a minimalist's home should reflect their personality. If your personality is attracted to the natural and rustic look, or quaint cottage look, or anything else, your home can still reflect that while being minimalistic. There's a lovely quote from becomingminimalist about this idea, which states, "find a style of minimalism that works for you... that is not cumbersome, but freeing based on your values, desires, passions". So with this definition in mind, I think it is very possible to have a mori kei minimalist home.

For instance, take these pictures here: 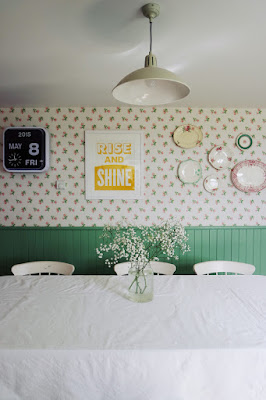 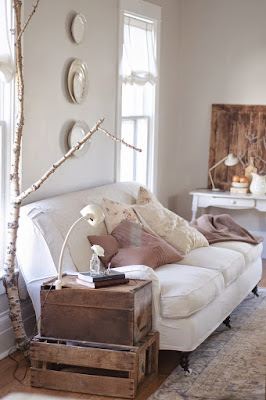 All of these spaces are clean and comfortable, while still portraying a natural feel. They are both mori and minimalist. It's all about purposefully picking pieces for your home that have natural materials, and the homey feel that you are looking for. As long as your space is not cluttered with things, then it can be considered minimalist, no matter what kinds of things are left in the end.

So if you're looking to create a minimalist home, but still love the mori aesthetic, it's entirely possible. Hopefully these pictures here will give you some inspiration on your minimalist journey. And if you need a little help, this guide by Miss Minimalist may be able to help you out a little.

My next mori minimalist post will be talking about a harder topic to tackle; clothing. So it could be a little while before I get it finished. But until then, thanks for reading, and good luck minimalizing! 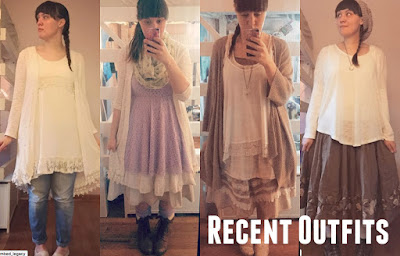 Here's another quick recap of my recent outfits posted on my instagram. As always, almost everything is thrifted. I hope you enjoy!

Wearing Mori with pants today. #morikei #morigirl #森ガール
A post shared by Kathryn Elaine (@forestsandtea) on Apr 3, 2017 at 6:25am PDT


It's a shocker, but I'm actually wearing traditional Mori kei today. I need to jump back into this area of the style more often. I've missed it! #morigirl #森ガール #morikei
A post shared by Kathryn Elaine (@forestsandtea) on Feb 23, 2017 at 6:20am PST


#latergram with shades of blue. You probably can't tell from the picture, but that blue underskirt is entirely panels of lace! #morikei #morigirl #森ガール
A post shared by Kathryn Elaine (@forestsandtea) on Feb 20, 2017 at 7:35am PST


I often see a lot of people asking what others consider to be casual mori. So, this is it. This is what I wear when I can't go all out. Or when I'm being lazy... 😉#casualmori #casualmorigirl #casualmorikei
A post shared by Kathryn Elaine (@forestsandtea) on Jan 24, 2017 at 6:28am PST


Classes are starting up again today, but at least I feel cute. 😉 #morikei #morigirl #森ガール
A post shared by Kathryn Elaine (@forestsandtea) on Jan 9, 2017 at 6:15am PST

Posted by Kathryn at 9:45 AM No comments:

Email ThisBlogThis!Share to TwitterShare to FacebookShare to Pinterest
Labels: outfits 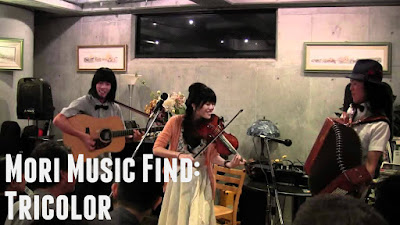 Today's Mori Music Find is tricolor. This group is a bit different from the groups I normally share, but I think that you will all enjoy them just the same. They are an instrumental group based in Japan, mostly focusing on the fiddle, guitar, and occasionally accordion type instruments. They play original works along with the occasional traditional jig or reel from England, America, and other European countries. If you like Irish music or fiddling, then this group will probably be to your liking. I find their music to be fresh and happy, and it never fails to bring a smile to my face and get me tapping my toes!

Have you ever heard of tricolor? If so, how did you like them? If not, I hope you enjoy! Happy listening!

Posted by Kathryn at 8:09 AM No comments:

Hello my deers! It has been a while since I last posted any instagram related posts, but today I'd like to resume that series by highlighting two more instagram users. As usual, I will focus on one smaller instagram user, and one with a larger following.

Today, I'd like to start out with a smaller instagram user named puellasilva. They have a lovely feed that consists of many pictures with the mori aesthetic, from nature to home, as well as occasional outfit posts, which are all quite lovely. I've been following them for quite some time, and I'm always pleased to see their posts on my feed!


The next instagram user I would like to feature is quietblessings. Her feed is not really mori per say, but rather has many mori-esque themes. Mainly, her feed consists of pictures of her home, nature, and of course her lovely cat. Every one of her pictures always feels so relaxing and cozy, and I always enjoy scrolling through her feed.


Cooking and baking with Volkswagen by my side. #sundays
A post shared by Ana (@quietblessings) on Jan 8, 2017 at 3:37am PST


Treasures from our walk.🍂🍁🌿🌰#letthembelittle #fall #itsthelittlethings
A post shared by Ana (@quietblessings) on Sep 30, 2016 at 5:07am PDT


I hope you enjoyed looking at the pictures I've shared here from these lovely accounts, and I hope you've found someone new here to fill your feed with lovely mori things!