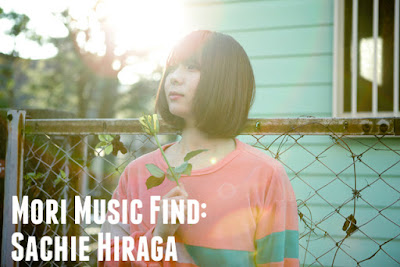 Today's Mori Music Find is Sachie Hiraga (平賀さち枝). If you like different and unique voices, than you will definitely love her music. She has mainly acoustic guitar focused instrumentals, which, coupled with her vocals, make for a lovely listening experience.

Have you heard of Sachie Hiraga? If so, how did you like her music? If not, I hope you enjoy! Happy Listening!

Posted by Kathryn at 1:32 PM No comments:

Today, I'd like to talk about something a little bit different than normal. As you can probably guess from the title, this will be about mori kei and minimalism. If you don't know that minimalism is, you can check out these links here, and here for a quick summary. (They explain it better than I ever could.)

You might be wondering why on earth I'm talking about both mori and minimalism side by side. The answer isn't all that simple, but I'll try to summarize it in as few words as possible.

Basically, a few years ago I discovered the concept of minimalism. The idea really stuck out to me, and I sort of put it in the back of my mind to try it out. Ever since I was young, I was a generally untidy person. I could never find the space for all my stuff, or the time to clean, and so everything would just sit on my floor. As I got older, I realized that sort of environment was causing me a lot of stress, so I decided to clean up my life. But even then, I still couldn't find the space or time to clean no matter how hard I tried, so my room was still usually somewhat a mess, and very cluttered. So when I discovered minimalism, it seemed like the perfect answer to my problems. However, around that time I was still in high school, and there were a lot of changes going on in my life which made it hard to start minimalizing anything. So I decided that I would start calling myself an "aspiring minimalist" (which you may remember having seen in the descriptions of some of my social media profiles) and I told myself I would do whatever little things I could manage in the meantime.

I spent about a year like that. I got rid of a few things, I tried to think like a minimalist if I went shopping, but I never really did anything more than that. But what I did do during that time was get into mori kei. I really started building my wardrobe, and I incorporated mori so fully into my life that you really can't separate me and mori anymore. And with that, I am quite happy. But even though I loved my style and life, my messy problems still remained.

About 8 or 9 months ago, one of my lovely tumblr followers asked me a question about minimalism. They wanted to know how I put mori kei and minimalism together, and if I had any tips and tricks. I tried to give them a few, but in the process I realized something: I had put minimalism on the back burner and pretty much forgot about it. So that led me to re-evaluate what I was doing. I looked once again at what minimalism was, and asked myself if that was really what I wanted for my life. I decided it was, and within a few weeks I was purging.

So fast forward to now. I've gotten rid of many trash bags of stuff in the past months of things from my room that I just didn't use, pretty much every drawer is organized (although there are still a few more to go through), and although I still have way more stuff than I probably need I am no longer swallowed by it. I think I can safely call myself a minimalist now, although my "minimalist journey", as a lot of people like to call it, is still in it's early stages. But now, I can confidently say that I am becoming a minimalist, and living with a minimalist mindset. So now that I've reached this point, I would like to properly address mori kei and minimalism together, and give you a few of my tips and tricks. There are a lot of things to talk about though, so I'm going to be splitting this up into a few different posts.

This post just serves as an introduction to the types of things I will be talking about, such as fashion and lifestyle. So keep an eye out for those posts to come (hopefully sooner rather than later), and maybe my own minimalist journey can inspire you to live more simply and purposefully yourself.

See you soon my deers!