Hello my deers! Today I have another collection of mori music finds for you! I don't have individual messages for each song or artist this time, but I hope you enjoy anyways and find something new to listen to!
1) You are a Gift from The Undateables Soundtrack
2) 郭采洁 Amber Kuo - 一页台北 (Au Revoir Taipei)
3) ぼくたちの失敗 (Bokutachi no Shippai) by 森田童子 (Doji Morita)
4) おいでよ (Oide yo) by コトリンゴ (Kotoringo)
5) Painovoimaa, valoa by Lau Nau

Posted by Kathryn at 2:59 AM No comments:

Trend-ization: How the Movement of Trends in Mori Brands Impacted How the Community Views Mori Kei 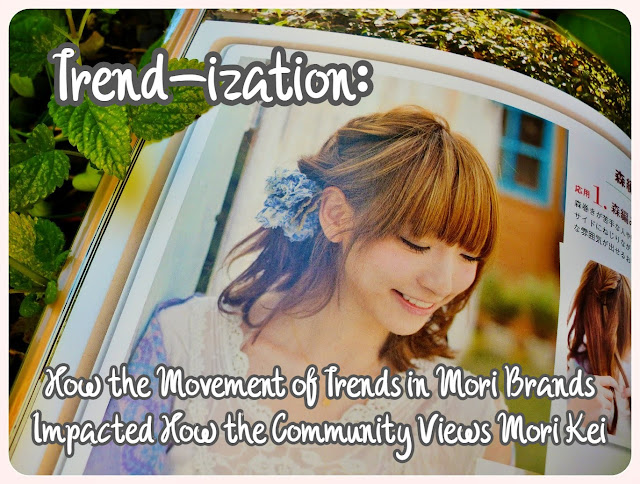 Recently, I have noticed a changing aesthetic in mori kei. Gradually, the style has moved from a distinct style that is easy to spot, to a more simplified version of its previous self. This change has long fascinated me, and I wanted to see how this happened and how to properly describe this phenomenon. After some thinking and research, I think I've come up with the answer, and I want to share it with all of you.

But first, a disclaimer. If you dress/think this way, no worries! Nothing is wrong with that, and I am certainly not saying you should stop or change what you're doing. Instead, I'm simply trying to describe how the community has changed and start a conversation about the nature of fashion.


What is "Traditional Mori?"

So let's begin! First, we need to decide what constitutes as "traditional mori" fashion, as opposed to this "new" version I have noticed. My personal definition would be as follows.

Traditional mori kei is a fashion that focused on layers, originally a fashion style moreso than a lifestyle, and was often very detailed. When I think of "traditional mori," I think of street snaps and magazines. Even when outfits were simple or darker in tone, they still had a detailed and purposeful feel. They never felt similar to modern fashion trends, and the silhouette or clothing types always set it apart. It was clear from first sight that it was something different from what you would see every day, and did not too closely resemble even other fashion styles in Japan at the time.

This traditional style dominated the mori scene until I would say around 2011 or so, with very little major changes or evolutions. Although many mori folk still wear this style, or something close to it, a bigger change has taken place in the community that has gradually changed the fashion.


What happened to Traditional Mori?

I've discussed the deterioration of the mori tags before, and it is true that a lot of the tag is now completely unrelated content. However, I've also noticed a lot of natural-esque coordinates being tagged that are not specifically mori but vaguely fit the aesthetic. This simplified version of the style is what I want to focus on today. Specifically, how it became a larger and accepted part of the style and community.

Natural fashion certainly fits under the mori umbrella (or the other way around depending on how you look at it), and natural trends have often been popular in Japan and abroad. But it has been a recent phenomenon that they were considered by the community at large to fit as mori kei. For example, coordinates that have a natural feel but feature un-mori aspects are now often tagged as such. (Examples include Liz Lisa coords, everyday fashion with a more hipster feel, a person wearing a floral dress, sweater, and boots, and so on.) In mori's early days, such outfits would never have been considered mori, and would rather be termed mori inspired or casual mori at best. So what changed?

My personal hypothesis is the focus on trends that has gradually taken over fashion styles in Japan also moved to impact mori kei. This "trends focus" has impacted many things, and most notably has had a big impact on J-fashion brands. Although brands in mori have never been huge, brands and magazines have always influenced the style greatly. And by studying their gradual evolution to trends based fashion, I think we can begin to see what happened to mori kei.

For an example, I want to examine the very popular mori brand, Wonder Rocket. First, because it has the most online information preserved of any mori brand. And two, because I think it paints a very clear picture of this phenomenon.


Early wonder rocket outfits were traditional mori, no question about it. The coordinates posted by the shop girls were also traditional and served to influence the fashion. Street snaps at the time also saw a lot of the brand's pieces being used, and it was very popular and well known. It was the hub of mori in Harajuku. It didn't run the style completely, but it greatly influenced the "street snap" version of the style that most people came to associate as the picture of the fashion. Of course, some outfit shots or catalog photographs were simpler to show off specific pieces, but walking into the store or looking at their website, it was clear that they were mori first and foremost.

The exact year that this began to change is hard to pinpoint. However, to the best of my abilities, I believe it started towards the end of 2011. I have come to this conclusion due to a few photos that were preserved of the fall collection from that year courtesy of this blog post. The brand's website is now down, as their store is now closed, so I have to rely on pictures and other sources from individuals who have archived the various releases.

Starting at least in 2011, Wonder Rocket began to move from specifically mori focused, to more mori inspired. Clear signs of this shift are seen in the many shorter hemlines similar to the popular brand Liz Lisa that are released. Additionally, you can see more simple pieces with very little detail. However, at first, it still remains mori-esque. But even that began to gradually change. 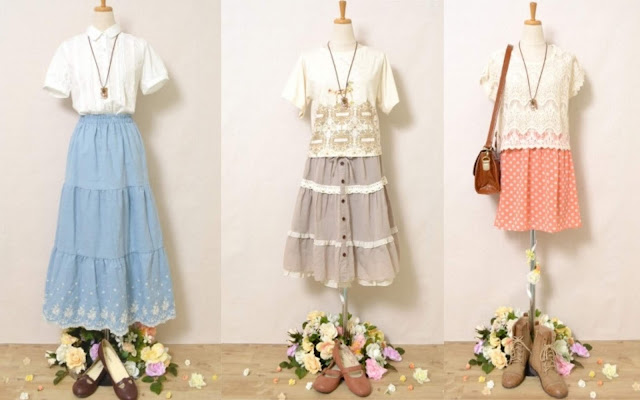 Towards its end, Wonder Rocket opened a sister store Momo. (Whether this brand was opened before or after is unclear, but it is assumed to be after. In either case, both brands greatly influenced each other.) Momo was supposedly a sister store, but instead of mori pieces it featured only mainstream trends and looks with a slight natural or boho feel. Slowly, as the stores influenced one another, Wonder Rocket began to produce the same.

Although pictures of the last few lines released by Wonder Rocket are no longer available, I can say from visiting the site myself in its last days that, before it closed, the brand was almost entirely trends based. When they finally closed their doors, they were no longer recognizable as a mori brand, and instead could have passed as any other boutique.


Wonder Rocket and the J-fashion Community at Large

Wonder Rocket isn't the only brand that this phenomenon has happened to. For example, simply search mori kei on AliExpress and you have to wade through many mainstream pieces to find anything mori. However, it is important to note that this has happened to almost all fashion styles in Japan, not just mori. Harajuku is no longer is the hub of J-fashion it once was, as tourists overrun the area and push out those who previously would inhabit those spaces. Westernized trends are more widely seen than styles nowadays as well. Just look at how few styles have been created in recent years. In some ways, we may have reached the end of J-fashion as we knew it, at least for the foreseeable future.

For mori, I think this change took hold firmly and quickly, and especially became prevalent when western influence began to dominate the fashion. Without a hub driving the fashion in Harajuku, the style became adrift in a way. No longer was the style driven by a small group that dictated what it should be. Instead, slowly, other cultures and trends have invaded, for both better and worse.

Don't get me wrong, this phenomenon is not truly good or bad, but has definitely influenced the fashion and evolved it greatly. As westernized fashion is almost exclusively based on mainstream trends, mori has followed that to an extent. I think this is why we have seen the growth in casual and inspired styles becoming more accepted as the main face of the fashion.

For me, I don't mind that the style has evolved. I also don't mind accepting simpler versions of mori that have long existed as bigger parts of the fashion. Mori has always been fluid and diverse, and it's something that I love about the fashion.

So, what are your thoughts on the evolution of mori kei? I would love to hear what you think! Until next time, my deers.