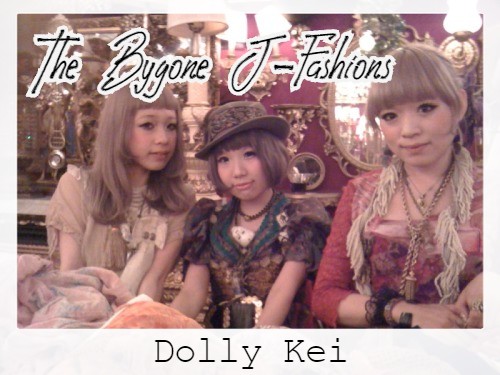 When I first joined the mori kei community, there were a few relatively popular styles that were considered related to mori kei. Nowadays these styles are pretty much gone from the internet and are no longer active, but I wanted to talk about a few of them here for those who might have missed them. Today, I want to start out with a personal favorite of mine: dolly kei.

You can find a few posts on dolly kei on the internet still. but they are often filled with dead links and expired pictures, or hidden from google searches by time. However, I'll link a list of resources here for those of you interested in learning more about the fashion:
So without further ado, let's get into this unique style! 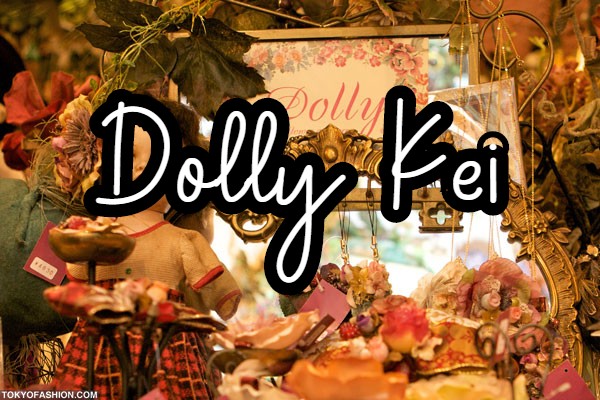 This Section was updated Sept. 2020:
Dolly kei's name is often considered to be the opposite of the style itself, and as such, it can be confusing for some. For many, the name brings to mind the "living doll" stereotype, which doesn't describe the fashion at all. Instead of cute and light, the style is darker and more mature.

The origins of the name are not clear, but we do know that the name was a mistranslation by the western community. A commenter claimed it was coined first by Tokyo Fashion, but sourcing for that is unclear. Regardless of who first spread the term, we do know the name was coined by accident from the name "dolly" (ドーリー) that the creator of Grimoire used to call her line of unique accessories. The style is sometimes also called Dolly Fashion or Antique Dolly Fashion, as well as Grimoire fashion in the west.
The Japanese names for the fashion are somewhat unclear. A few different names are used, but it is uncertain which is the most popular. The names used by the creators are Antique, Vintage, and Used. The name of the shop, Grimoire, is also used to describe the style. However, regardless of the initial mistranslation, the use of the name Dolly Kei was popular enough worldwide to gain mention in Japanese media (mentioned as ドーリー系), proving its popularity in describing the style. It is worth mentioning though that the creators do not accept the term, in fact, one of the creators is quoted as laughing when she first heard the mistranslation! For the international community, though, the term has stuck and is unlikely to ever be replaced. 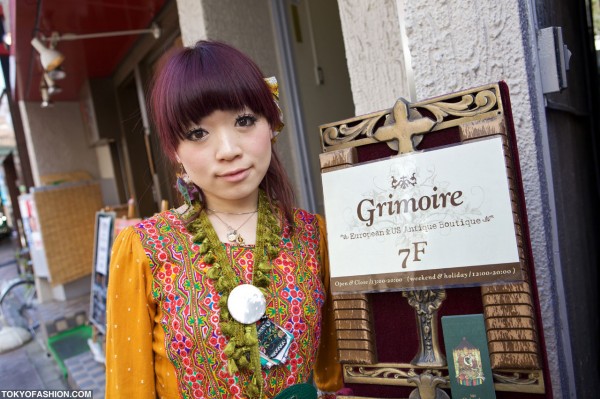 Although most of the information on Dolly Kei has since been removed from the internet, the history and style of Dolly Kei are fairly straight forward.

The style originally was started around 2010 by the brand Grimoire, which still exists to this day. However, the brand is now much more mainstream and has lost a lot of its original individuality, similar to what happened with the mori brand Wonder Rocket before their eventual closing.

According to Grimoire's founder Hitomi Nomura the style was originally inspired by used and vintage clothing from America and Europe, as well as European folk tales, and various movies and stories, such as Harry Potter and Alice in Wonderland.

The style was most popular from 2010-2012, during which Grimoire's store saw a lot of popularity, and dolly kei street snaps were extremely common. The fashion began to decline after 2012, but was still well known for many years. The style is still is a bit infamous in natural fashion circles, or gothic J-fashion circles, where it is often referred to in discussions about J-fashion. It was also for a time considered a "sister style" to mori kei.

Although no longer an active style, there are still those in Japan and abroad who wear it occasionally. However, its days of being one of the most recognizable street fashions have come and gone. 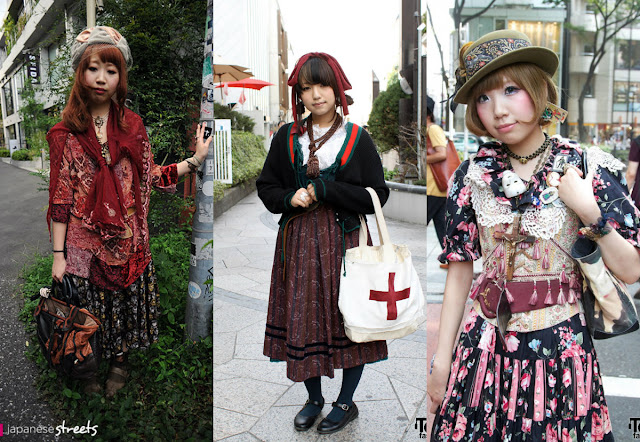 Dolly kei is a very unique fashion style. However, it is often confused with mori kei and cult party kei due to its fondness for layers. But dolly kei fashion is a fashion entirely its own.

Classic dolly kei looks include a few key features. Firstly, dolly outfits include lots of dark colors and jewel tones. Dark greens, reds, blacks, blues, and browns, are most popular. Additionally, dolly coordinates are always very detailed. Be it lots of patterns, embroidery, or textures, no dolly outfit is complete without a significant amount of texture.

Dolly kei also has a distinct vintage feel, almost as if the person wearing it had just stepped out of a fairytale. Vintage brands are also often incorporated, such as Gunne Sax dresses. Vintage pieces as a whole are highly encouraged in the style.

Dolly kei used a lot of skirts and dresses, as well as sweaters and shawls. Layers, like in mori, are super important. However, dolly kei often has a more fitted silhouette than mori, with belted waists and corsets sometimes being used.

For accessories, tassels were a huge trend for a while, as well as fur. Lots of brooches, necklaces, and hair accessories are also popular. 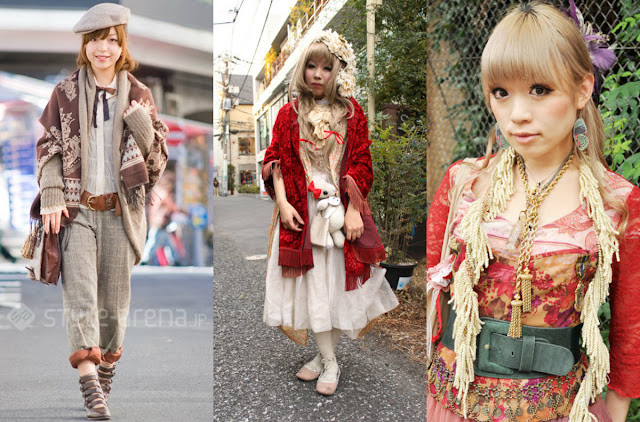 As the style was founded by the brand Grimoire, it really had no set rules. Therefore, although most coordinates had similar themes, these themes could easily be changed at whim. For instance, lighter colors often were sometimes used in coordinates, or aspects from other styles were combined, like the use of red crosses and lightly colored peignoirs from cult party. 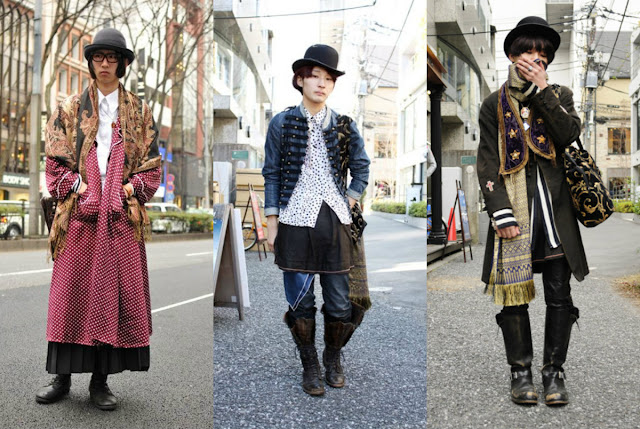 There was also a male-focused version of the style that also existed from the very beginning. It was also quite popular for a good time. The style is almost the exact same as the female aspects of dolly kei, however, it uses fewer skirts and dresses, and more pants. 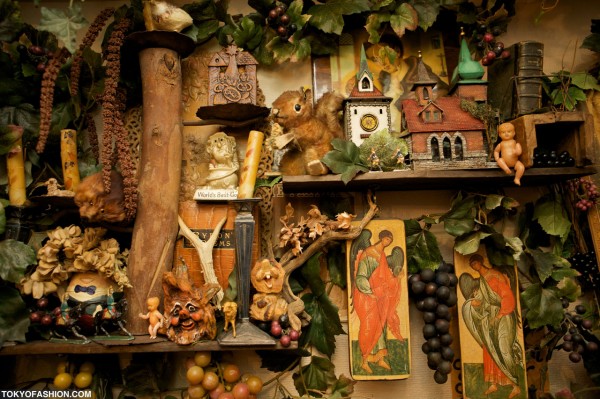 Dolly kei style is known for its creepy aesthetic. Although not always creepy, and sometimes more focused on the vintage aspects, dolly kei can also lend itself to various creepy accessories and pastimes.

Many who enjoy the style have incorporated the use of animal bones, real furs, and antique doll heads or doll parts into their outfits. However, unlike cult party kei, dolly kei's creepy aspects are always subtle and placed in a classy way as opposed to standing out as a main focal point. 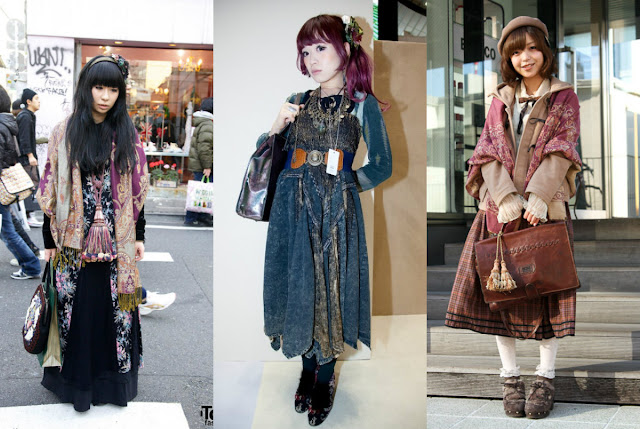 Dolly kei has never really had a lifestyle. In fact, Namura of Grimoire even said there was not one. Instead, the style is simply an aesthetic. However, things like thrifting, antique shopping, taxidermy or collecting and using animal bones all seemed fairly popular amongst many wearers. However, they were by no means required of those who wore the style.

Have you heard of dolly kei? Do you like it or wear it? I used to wear it occasionally back in the day, but I no longer wear it now. It does still has a special place in my heart, and I love the elegance of the style.