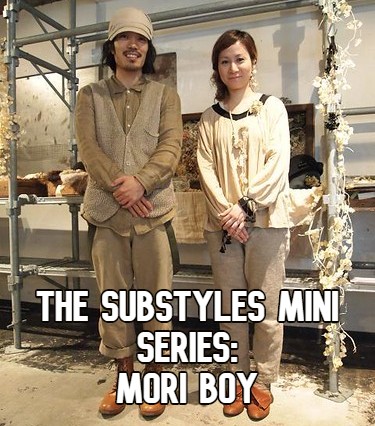 Today we are continuing the substyles mini-series with another well-known substyle, mori boy! This style was established both in Harajuku in the early days of mori kei, and refined by those abroad. It is one of the smallest mori substyles, but still has some active participants. Although most mori boys are not active sharing photos on social media these days, they do still exist, and the style is still well known. 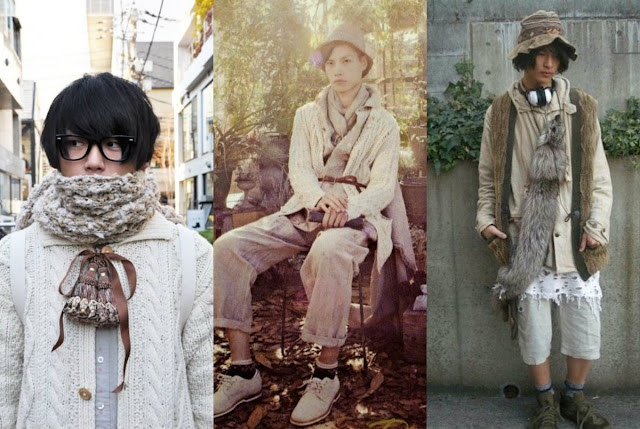 Mori boy fashion was originally defined by many of the traditional mori trends that were common on the streets of  Harajuku. The style has less of a focus on lace than mori girl, and has more of a mountain man look.

Similar to the original fashion style, mori boy does feature prominent layers, usually in the form of multiple shirts, sweaters, and scarves. The style also has a natural color palette, and a focus on natural fabrics. Furs were also often seen, as well as caps and baggy pants. 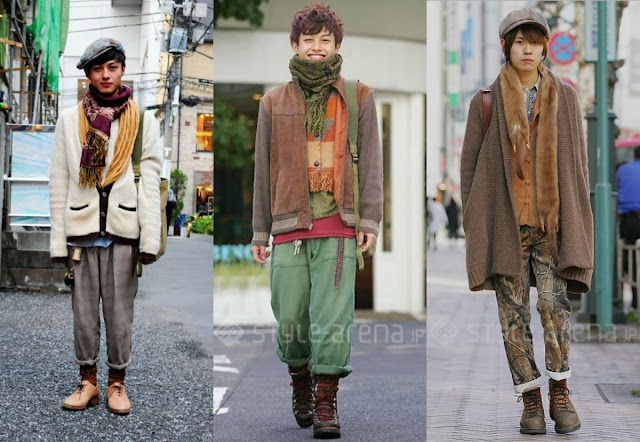 Moi boy style has been added to and changed over time by the international community. These days, it is widely accepted that some more simple styles with less layering and more hipster fashions (see flannel) are also acceptable for mori boy. Because of the style's small community, those who do wear the style are free to create the style as they see fit. 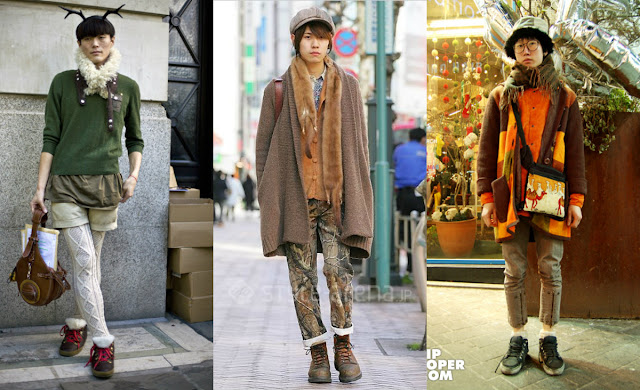 There is an unofficial checklist for mori boy created by penandplanchette. I remember reading this post back in the day when it was posted, but it never really caught on and was created more for fun than anything else. It is much more intense and detailed than the actual mori checklist, but I thought I would include it here for those interested in the style to take a look.


Styling:
+ enjoys looking comfortable yet eccentric, through use of eclectic patterns & textures
+ while colors range from light to dark, they are likely to be unsaturated, seemingly bleached by the sun or having a worn-in look
+ likes to wear interesting fibers, like: fur, leather&suede, wool, linen, bamboo
+ prefers more detailed fabrics to simple ones, like a textured knit to stockinette, or herringbone or tweed to plain weave.
+ shoes are rugged and utilitarian, but can also be a bit stylish. Worn in leather boots and wool topsiders are popular, but mocassins, traditional Japanese sandals and even battered western sneakers like New Balances also work, as long as the color coordinates.
+ wants to look like a wanderer, may accessorize with tools like binoculars or compass'
+ will usually carry a bag, backpacks and large leather or canvas satchels are roomy and sturdy
+ hair can be short to long, but has an unstyled tousled look, bedhead is ok, especially if it's curly
+ loves scarves of the thick and chunky variety, can be knit, felted, or even a fur stole
+ often wears a statement cardigan or jacket, what it is is totally up to personal preference, but is often a major element of the outfit. Common examples are large gauge sweaters, cardigans with patterns or large buttons, or haori with a large printed pattern.
+ likes vintage style, but stays away from the fussier elements of western clothing
Lifestyle
+ enjoys working with hands, hobbies like gardening, crafting, cooking, etc.
+ loves to read, and maybe write, may daydream about vintage typewriters
+ likes animals, and may even look to specific ones for outfit inspiration
+ prefer to appear quiet and wild, mysterious
+ enjoys outings that allow for discovery, like wandering in the country or a new part of town
+ might settle down in a coffee shop for longer than average
+ likes to take photos of adventures, but may lack for photos of themselves (they are behind the camera!)
+ whether openly or not, may believe in fairies and other folkloric characters or spirits
+ has an interest in music, whether playing or listening, especially unusual instruments like harpsichord or ocarina
+ is a collector of objects, usually small things they think are under-appreciated
+ often found in thrift, vintage shops, flea markets
+ enjoys museums, especially ones with dioramas
+ if the choice is present, prefers rustic and wholesome food & drink, not necessarily veg/vegan
+ hot drink connoisseur
Wardrobe Basics
+ try to stick with mostly unsaturated colors like ecru, deep navy or cadet blue, khaki green, burgundy, charcoal, chambray blue, sage, etc. most colors have a place, as long as they can be described as "rustic" or "earthy"
+ brights can be included too, but can be more difficult to stay distinctly "mori"
+ patterned or lightly textured button-down shirts. chambray, flannel, and printed cotton are easy to find.
+ T-shirts with henley neck detailing or waffle texture
+ bold & simple patterned sweater that can go with many outfits, ecru and navy dot or stripe is perfect.
+ bottoms can be most any type of rugged pant, even trousers if they are worn. even wide culotte pants or wrap skirts are fine, just try to keep the forest wanderer element here.
+ good starter bottoms would be straight legged corduroy or denim pants in a khaki or faded blue.
+ this style is not for minimalists, it usually requires layering, even in summer, for the right look. that's not to say you have to wear long pants, socks, cardigan, buttondown etc when its sweltering, but wearing a lot of items at once is almost essential.
+ good starter shoes might be leather boots for cool weather and short desert boots or Birkenstocks for warm weather.
+ since summer is a difficult topic in all mori styles, a nice mori boy summer outfit might be:
- khaki shorts with a leather belt
- interesting crew length socks (to show color or pattern)
- short-sleeve button-down, with a flower or other brooch
- talisman style necklace worn over a shirt
- backpack & watch
- hat (lots of options: straw boater, vintage felt, twill newsboy, etc, again color is important)
- so, you can wear a lot of things but not be all covered up! 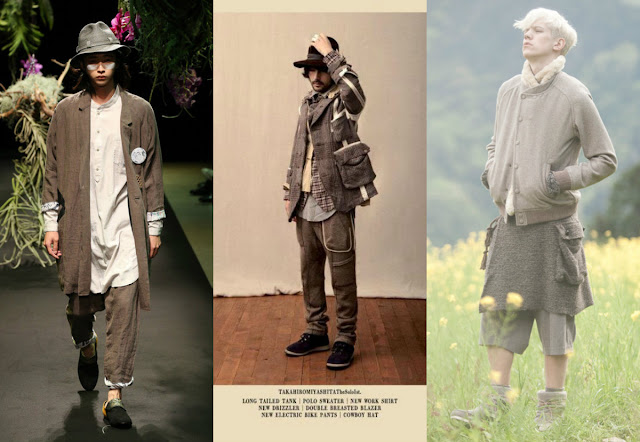 When it comes to talking about mori boy, it is important to know that newer mori folk have moved from the term mori girl to mori kei, and with that move some have also begun to blend mori girl and mori boy fashion as well, placing everything under the ungendered term mori kei. Although some do still separate the style for their personal use, it is generally accepted that just as mori "girl" is not simply for girls, mori "boy" isn't simply for boys. Some argue that the gendered style names should be dropped entirely, but others say the distinction between styles deserves a separate name.


Have you heard of dark mori? Do you like it or wear it? It is not a style I personally wear, but I have always admired it from afar and would love to see more coordinates out there.

Until next time my deers!


Casual Mori
Posted by Kathryn at 9:30 AM