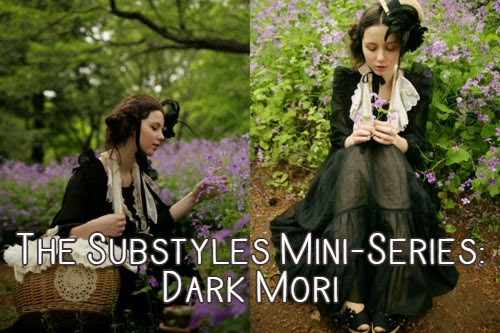 Hello my deers! Welcome to the first post in my new mini-series about mori substyles! I have been meaning to talk more about these substyles in-depth for a long time, but I just never got around to it. Today, I'll be starting off with one of the most well known (and most often misunderstood) substyles, dark mori.

There are a few posts about Dark Mori still floating around the internet, a lot of outfit photos, and the name of the style generally is common in the collective mori consciousness. A few posts I would recommend for more information about the style are Miss Kellie's post, Crow Fairy Laura's post here, one by Milk Teeth here, and one by Carnivale Salt here. However, although it is well known, the specifics about the style are often confusing, and the history of its creation is almost unknown to most.

The history of dark mori is quite interesting. Unlike mori kei, dark mori was not created in Japan, but rather on the internet by western audiences sometime around 2012. The style also appears to never have spread to Japan at all, and there are no street snaps of dark mori, or magazine looks, at least not that I can find. Regardless of its creation, the style is still considered to be an official substyle by almost everyone in the mori community.

The style was actually created by a group of various people on Tumblr and other social media platforms. One person who was well known for helping create the style is Mai Magi (previously known as shortcuttothestars). Eventually, the base ideas for dark mori and those who created it would create a new style, Strega, and leave the dark mori community. However, although they left the community behind rather quickly, the term dark mori and its style still lived on and grew to become almost as well known as mori kei itself.

As the official creators of dark mori created the style, they came to realize that many of them desired a different sort of style, one focused less on rules and the silhouette and ideals that are attached to the mori kei style. This led to the creation of Strega fashion, which has now become well known amongst online fashion communities. The style is often confused with dark mori, partially because of their similar origins, and also because of some style similarities. However, Strega officially is quite different from dark mori.

The official description via Mai Magi of Strega is as follows:

You can learn more about Strega here if you are interested. But to sum things up, the creators grew tired of the restrictive nature of mori kei, and sought to create a more all-inclusive style. Because of this, Strega outfits may often resemble dark mori. But although Strega can sometimes be dark mori, dark mori cannot be Strega, as it follows the guidelines of traditional mori kei style.

So what exactly is dark mori? What makes it different from traditional mori kei? The main difference is its focus on dark color schemes, the aspect of the style that gives it its name. Black is by far the most popular color scheme for the substyle, but dark blues, dark reds, and dark browns, as well as white, are all used occasionally.

Similar to mori, dark mori focuses on the use of lace, many layers, knit fabrics, and natural fabrics. Its silhouette is almost indistinguishable from traditional mori kei, although dark mori outfits may add some "creepy" or "witchy" elements, such as ripped clothing, or witchy stripes.

Those who created the style actually worked together at its inception to create a dark mori checklist The checklist was originally hosted on the now-deleted blog Strega's Forest, which was originally a dark mori blog, that later moved to Strega with a large portion of the community. The checklist has been reuploaded to various blogs, although the original post has been lost over time. I have copied it here for you to read, and have reworded some points slightly for grammar's sake.

This list is useful in understanding the basis for the style, but it is by no means official or even widely accepted by the mori community. It is important to note that not even the original creators of dark mori would follow this list religiously, and would pick and choose from these items. Additionally, most of these points came to describe Strega more than dark mori as time went on, leading them to become less relevant to the style.

Have you heard of dark mori? Do you like it or wear it? I find the style quite charming, and I have worn it occasionally. But it is its unique history really interests me. It is interesting to see how much the style has grown and changed over time, and how it has become such a core part of the fashion community!

Until next time my deers!