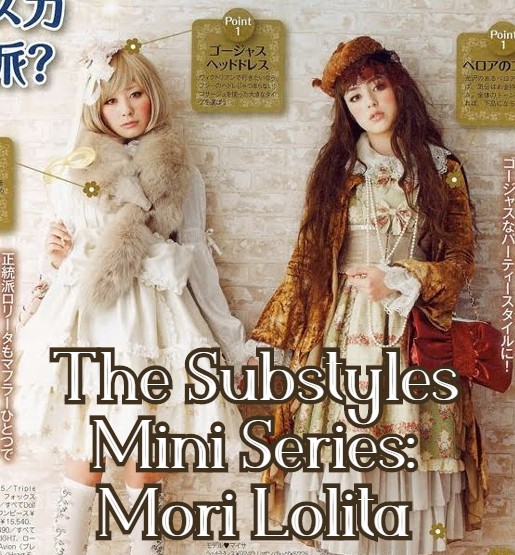 Unlike mori gyaru, which, although spawned from two separate styles, had its own community, mori lolita remained only a spin-off to both genres that it shares a name with. Most who wore the fashion were fully into lolita or mori fashion, although more often lolita than mori. This meant that those who did create coordinates only made a few inspired by both styles here and there. Very few, if any, made it their sole fashion of choice. This is what contributes to its lack of notoriety on the internet, as well as how few examples of the style actually exist.

Also, because it was a short-lived fringe style, it never had any set rules or a checklist. Rather, each person who wore the style was free to create their own interpretation of the blending of the two styles. There was a small post by Misselthwate Manor here on what mori lolita could consist of, trying to classify the style, but it was by no means a guideline for what the style had to be, and never really caught on. 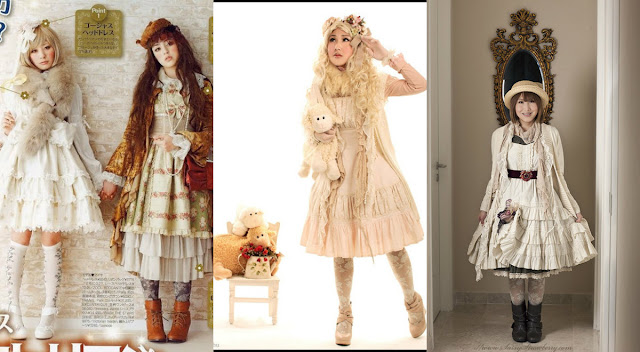 Mori lolita is much more similar to lolita than mori, although it does share some similarities with mori kei, giving it its name. Those similarities can include greater use of lace, more layers than would be seen in lolita (usually consisting of sweaters or shawls and maybe a few skirt layers or lacey scarves), natural color palettes, and more natural fabrics.

The easiest way to describe the look and tie to lolita fashion in mori lolita would be to say that while mori lolita may look somewhat mori, it always looks like lolita first. For example, mori lolita still uses the traditional bell or cupcake lolita shape for dresses, as well as using the traditional JSK as a focus for the coordinate. JSK's in mori lolita do tend to be neutral, or contain forest themed prints, but are ultimately still lolita pieces repurposed in a more mori fashion.

In addition to the prominent use of JSK's, many aspects of "mori" in mori lolita coordinates often already exist in other lolita substyles, so although they work for a blending of the two styles, it can be easy to mistake some mori lolita coordinates for another lolita style, like country lolita for example. However, not all styles are so subtle, and some have taken the mori aspect, especially lace, to a more extreme. However, most have not, and remain subtle homages to mori fashion. 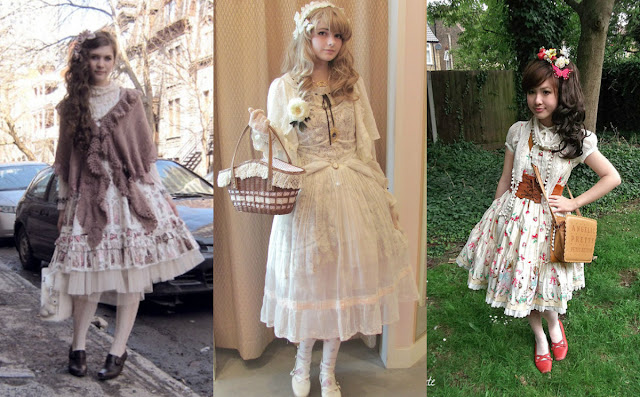 As previously mentioned, mori lolita was a short-lived style, and its popularity boomed and died quickly. Although the exact dates are unclear, I personally remember it coming into popularity towards the end of mori kei's boom, and lasting only a few years or so. But the name of the substyle has still remained somewhat well-known in both mori and lolita communities. However, not many outfit pictures exist of the style. In fact, most iterations of the style were from the international community, and many have since been deleted. Although it is possible that some still do wear the style, it has certainly lost the widespread appeal that it had for a short time.


Have you heard of mori lolita? Do you like it or wear it? It is not a style I personally wear, but I did enjoy looking at coordinates of it many years ago when I was interested in lolita fashion.

I hope you enjoyed this short little series my deers! Until next time!