Day 7: Are you also into Lolita? I find a lot of Mori Girls do Lolita as well! Whether you are or aren't a Lolita, why do you think this is?

I'm not into lolita at the moment, but I used to really like it. I used to be more into the overly cute aesthetic, which fit lolita very well. I even bought two dresses, thinking I wanted to become a lolita. Nowadays it doesn't really appeal to me because my tastes have changed. In addition, I found that I didn't really like the community. Even though there are some really nice lolitas out there, there's just too much negativity and drama for me. Also, lolita just costs too much money for me to afford, and it doesn't really work as a daily fashion for me personally. I couldn't justify paying for expensive dresses that I'd probably only wear twice a year.

I think other mori folk also wear lolita because of some of the similarities in aesthetic. Variations of lolita, like classic, can have natural colors and lace like mori kei, but mori is much cheaper than lolita and can be much more practical for day-to-day situations. I think that appeals to those who are into lolita, and I think some of them use it as their daily style for those reasons. 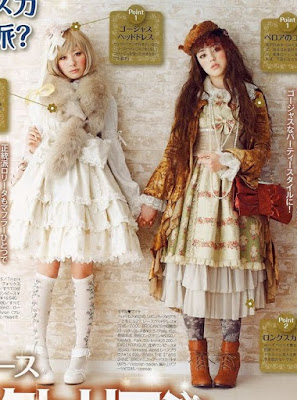 Do you wear, or used to wear, lolita in addition to mori kei? Why did it appeal to you personally? I'd love to hear your thoughts!