Almost Mori: What is Natural Kei? 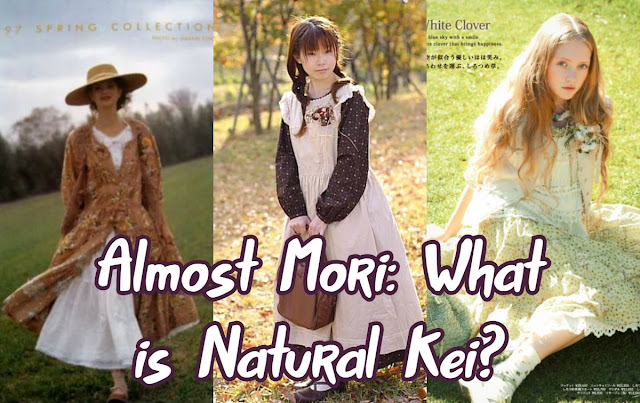 UPDATE: I have recently found out some new information about natural kei's identity that I highly recommend reading in addition to this post. You can find it here.

Welcome to the fourth post in this series, my deers! Today we will be discussing one of the longest-running natural Japanese fashions, Natural Kei.

Natural Kei fashion is no longer a very active style, although it is by no means completely dead. However, it exists more now as a style in the collective conscious, rather than having an active community. If you are looking to learn even more about the fashion after this post, a good source on Natural Kei fashion is the now inactive blog Moss Marchen. I recommend this blog the most, as the person who ran it was actually into the fashion themselves. There are a few other sources around as well, although they are few and far between, and are written from the perspective of someone in the mori kei community. They also tend to have some inaccuracies, but I will get into that later. Regardless, if you are looking to learn more about the fashion, I would recommend the posts by Miss Kellie and Little Miss Wonderland.

Before we begin, I will say this post turned out a little different than I thought it would. Originally, I thought this post would be easy to write, but it turned into a bit of a longer project than I expected, but you'll see why as you read.

So without further ado, let's begin! 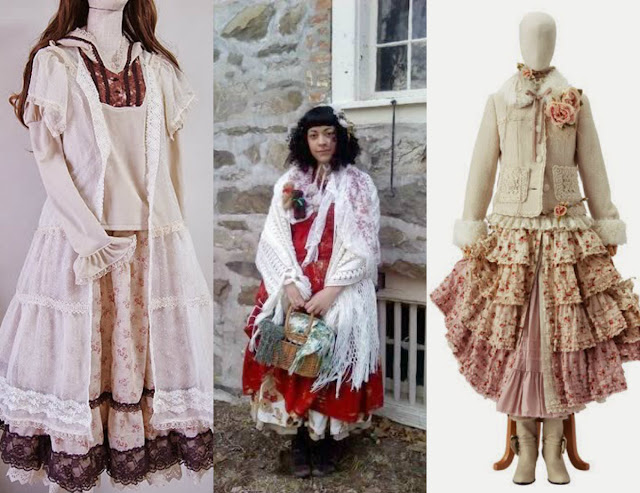 When I started researching for this post, I came across a lot of common claims. However, the legitimacy of these claims is a bit dubious. But before I say why, let's lay out the popular description of Natural Kei.

Most blogs claim Natural Kei was started in the 1970s in Japan. They also claim it was influenced by European and American prairie movement fashion. When I joined the mori community, many people told me that, in its height, it was a very popular style in Japan. However, it was almost dead by the time mori kei came around.

I always accepted these claims about the fashion, however, as I began to do my own research for this post, I noticed many inaccuracies and areas of contradiction. Further research showed me that many of these claims are false, or distorted versions of the truth.

I could just leave you with this, but as a historian, I feel like I have a duty to put the correct information out there, so that is what we are going to do.

If you'd like to skip the research stuff and background information, you can scroll to "the fashion" where I start talking about the actual clothing style, or "conclusion" where I wrap everything up. But if you'd like, you can bear with me for a bit as we try to discover the truth about the origins of Natural Kei.


Nowadays, although information on Natural Kei style exists, its history is hard to find, and information can often be conflicting. I speculate that the reason for this is most likely due to its creation before the start of the internet. I will try to clarify truth from fiction here as best I can, but please take everything I say with a small grain of salt, as hardly any credible sources with citations exist at this moment. Regardless, I will try to piece together the best and most complete story that I can.

First, let's start with the dates. Although mori blogs often state Natural Kei was created in the 1970s, the actual dates are a bit more convoluted.

According to Google arts & culture, the most accurate date I could find is that the PINK HOUSE brand, the prominent brand that basically created the style, was "launched as a separate company in 1982." However, some of the photos on this site of other styles are inaccurate, such as their depiction of Mori Kei where they have a picture of Cult Party instead. Regardless, this seems to be the most accurate.

Another source, Virtual Japan, claims that "Pink House opened their first...shop in 1979." However, their sources are murky and they claim that PINK HOUSE is a lolita brand, which is inaccurate.

PINK HOUSE's own website has no information on when they were formed, and no history either, so it is impossible to say who is right here.

The influences of the style are often cited as Prairie Fashion from the united states, such as Laura Ashley and Gunne Sax. Certainly, their influences do exist in the style. However, the fact that these brands were popular in the 1970s usually is used to fuel the idea that Natural Kei was created at the same time. As we have seen, that is inaccurate. However, they certainly still influenced the fashion.

Natural kei is also based heavily off of French fashions and folklore, such as Rococo fashion. This connection to french fashion has led some sources, such as Virtual Japan, to claim it as an early predecessor to Lolita, stating, "known as an elegant, classic form of the Lolita fashion scene, Pink House produced multiple designers and offshoots including the likes of Kaneko Isao, who worked on both Pink House and Ingenborg designs before eventually starting his own labels, Kaneko Isao and Wonderful World."

Although PINK HOUSE may have influenced Lolita designers, I think the claim that it is Lolita's earliest form is most likely false. Some of the influences are the same, but it has a long-running history and has long been seen as distinct from Lolita.

So what can we say about Natural Kei for certain?

As for the fashion, my best guess is that multiple truths about the fashion were shoved together and diluted over time. My personal thoughts on the timeline of things is this: In the 1970s, European companies experienced a prairie revival, in the 1980s, Pink House and other similar brands began to create pieces inspired by this, the early predecessors to Natural Kei. Then Natural Kei in its current form came about in either the late 80s or the early 90s, along with other brands that were creating Lolita fashion around the same time. Both had similar influences and were loosely connected, but gradually split and grew into their own subcultures over time.

Natural Kei was a long-running style regardless of how right or wrong any information shared by blogs is, and it has long been well known by mori folk.  It is unsure how popular the style actually was and is, but the fact that PINK HOUSE brand still exists suggests it had at least at one time a decent amount of popularity.

Natural Kei fashion is much, much more straight forward than its history, so the convoluted stuff is over now!

Natural Kei style is very often confused or absorbed into mori kei due to its many similarities, but, it is a distinct style. It actually still has an active brand running the trends of the style, PINK HOUSE, which still exists and produces Natural Kei clothing. You can actually still visit and purchase from their website, and they still have shops open in various Japanese cities, such as Hokkaido. 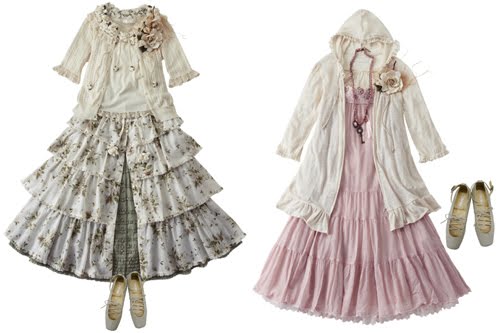 Some of the similarities between Natural Kei and mori kei are a general focus on natural color palettes, layers, and A-line shapes. Natural Kei also uses a fair amount of lace and florals, like mori, and is also focused on being a natural fashion. Sweaters, scarves, baskets, and shawls are also popular in both styles. 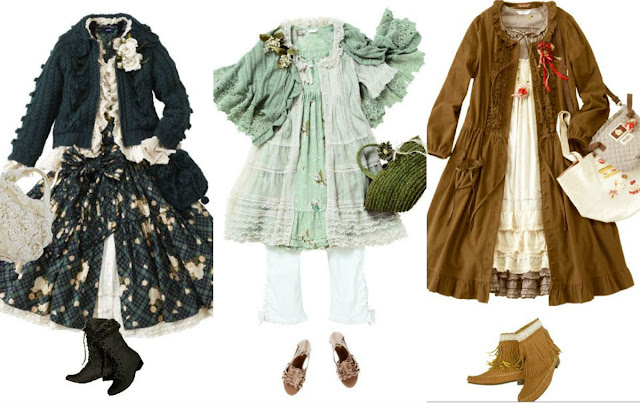 Although it is similar in many ways, there are still some major differences that set the style apart.

Firstly, layers in Natural Kei are concentrated on skirts, as opposed to mori kei that can have both upper and lower layers. Additionally, where mori has no real length requirements for skirts and dresses, long layers are essential to Natural kei. No classic natural kei coordinate will have short layers. Instead, the common length is to mid-calf or ankle. Although there have been a few exceptions, they are extremely few and far between, and Natural Kei practitioners and brands continue to showcase the longer silhouette as a staple of the style.

Another difference is Natural Kei's use of brighter color palettes and color palettes that are focused on singular color themes (such as all browns, all blues, all reds, etc.) In this way, it shares a more similar composition and silhouette with classic or country Lolita than mori kei.

A few other minor differences are the extensive use of aprons and pinafores, no real style version with pants (save a few odd coordinates with lacey bloomers), and the extreme use of detail. 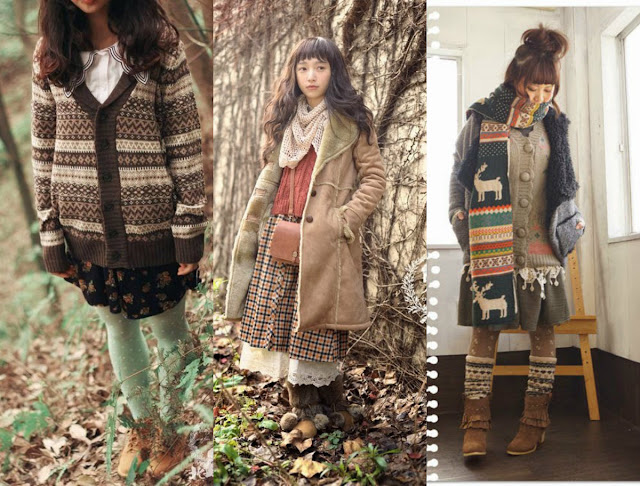 When I first joined mori kei, the mori community (not the natural kei community as far as I can tell) believed that natural kei had evolved to a more mori-esque look with fewer layers and ruffles. Kind of a simplified version of mori, if you will.

However, although this idea is widespread across the internet, this has never been confirmed by the actual community. In fact, PINK HOUSE's style itself has not changed, and still holds firm to the traditional silhouette. I would venture so far as to say this fact is pretty much debunked. However, with so little info out there, it is hard to say for sure. But as this information still exists on the internet, I thought I should address it here. 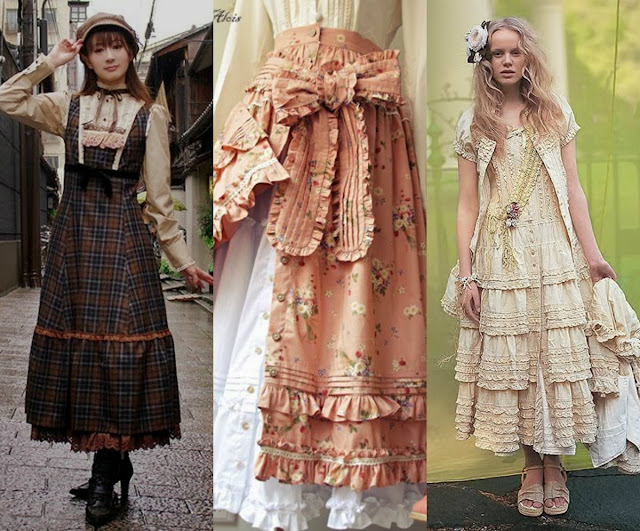 Natural Kei has no real aesthetic that I know of or can find. However, one would assume that the classic mori aesthetic would apply to Natural Kei as well.

Some have tried to explain Natural Kei's aesthetic as being a girl who lives in a small town on the French countryside near the woods, instead of in it. However I would say this distinction doesn't really matter, and more describes the fashion influences on the style than the lifestyle associated with it. One could easily say Natural Kei is more suited for woodland romps than mori, or vice versa, depending on your preferences. 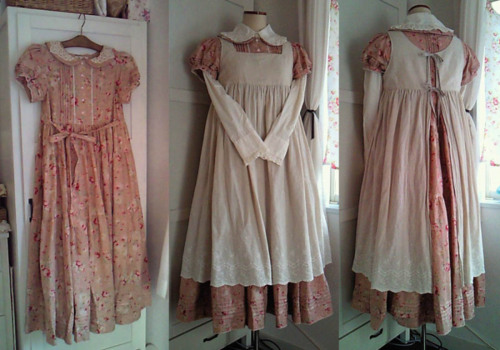 Like hama, yama, and mori gyaru, Natural Kei is also considered to be a sister style to mori, due to its similarities and its state as a natural fashion. However, like mori gyaru, Natural Kei has in the past had its own community, especially since it was created long before mori kei. Regardless, nowadays the style is mainly forgotten, and so most people who wear natural kei are welcomed much more closely than before into the mori kei umbrella with all other natural fashions.

Have you ever heard of Natural Kei? What do you think of the style? Would you ever consider wearing it? I'd love to hear your thoughts!

Lagenlook
Posted by Kathryn at 1:18 PM