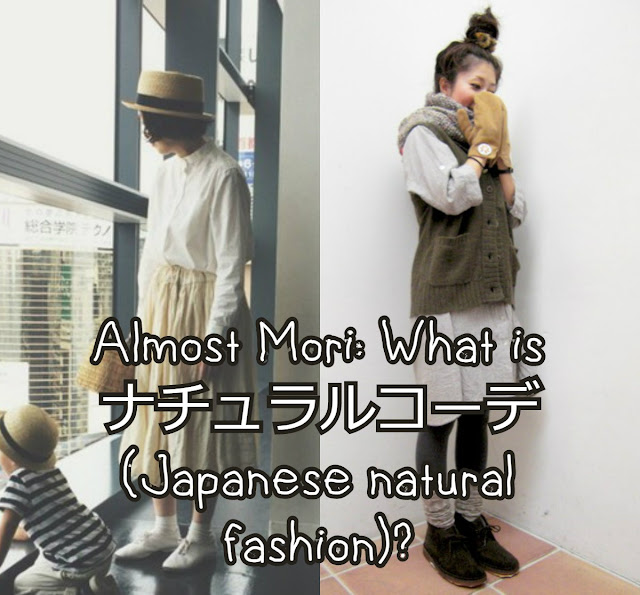 Hello my deers! We have finally made it to the last post in this series. Although I do have a few more mini-series planned to talk about a few more styles related to mori, this is the last "almost-mori" fashion I want to discuss. So, today we will be taking a look at Japanese natural fashion. For the sake of simplicity, I will refer to the style here as natural style, since it is a bit quicker to type.

Natural style is a new, more modern trend in Japan. In some ways, this is the evolution of the mori trend in Japan, and what happens when a more extreme fashion style becomes mainstream. Although it is not directly tied to mori, it is similar enough that I thought it warranted its own post. 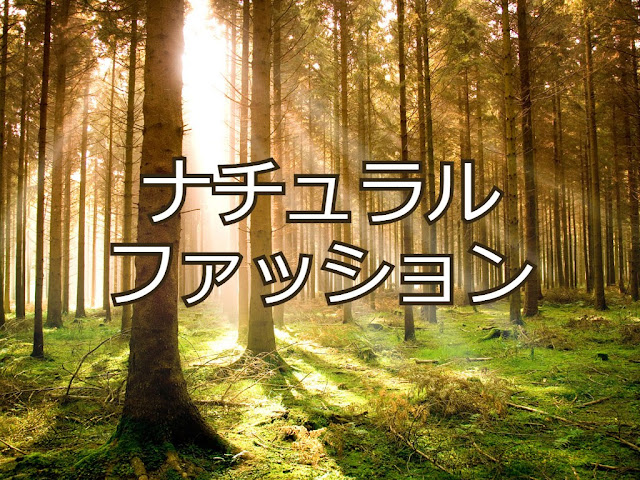 The name ナチュラルコーデ (also known as ナチュラルファッション) directly translates to mean "natural code" or "coode" in English. Coode, for those of you who don't know, is a term that means "outfit." It is a newer version of the word coord (or コード),  short for coordinate, that old-school j-fashion communities used to use. The name stands directly for what the style is, a natural fashion, and is the term used to tag outfits in this style on Instagram and other social media.

Although this name can be referred to as a specific style, it is not a "style" in the sense of those that have come out of Harajuku, but rather more of a trend. It follows new ideas and changes with what is popular at the time, and it does not have a community or lifestyle attached to it, unlike other Harajuku styles, or "kei" styles. Although some may argue that mori might not have all of those criteria all of the time, the fact that such things are often attached to the style is what sets it apart from a general trend, especially that it has a community.

UPDATE 1/20/2020: According to a reader, the term Natural Kei in Japanese (or ナチュラル系) Is also sometimes used to describe the style. This is not to be confused with the known English name for PINK HOUSE fashion, Natural Kei, and is its own separate term not associated with the brands or style in any way.

The rise of fashions such as natural style are generally tied to what I like to call the "trends movement" that is being experienced across Japan in the fashion world. This describes a general move from Harajuku fashions with lifestyles and communities, to the following of common trends. Of course, trends following has always been a phenomenon in Japan and around the world, but this is a more extreme move, with more and more fashion styles dying out in Japan, and no new fashion styles emerging from Harajuku. There are a few reasons for this, such as the overcrowding of tourists in Harajuku, but it seems that for most there is simply a decline in the popularity of more extreme fashion styles. In some ways, we may be witnessing an end of an era in Japanese fashion.

To understand the basis of natural style, it is important to briefly note the current fashion trends that are popular in Japan at the moment that help fuel the style. Natural styled trends are currently seeing another rise in popularity in Japan, although it is by no means the first time natural styles have been popular. Past variations of natural trends were popular in the 70s and 80s with more prairie styled trends, as well as in the early 2010s at mori kei's conception. However, they have recently seen a new comeback after a period of falling out of style. Currently, things such as floral patterns, linen and natural fibers, loose-fitting clothing, and natural colors are all popular, many of which are features commonly seen in mori kei as well. For more on current trends, I would recommend watching this video on trends in Japan in 2019 by Annika Victoria. Additionally, a fellow mori girl alerted me to the magazine liniere and their associated brand kuraline that are also popular in spreading the current natural fashion trends.

As natural style is not a true style, it has no real set rules, rather following common trends that fit into the broad category of "natural fashion." But, because it follows trends, most outfits have a lot of things in common that do tie it together as a recognizable style. 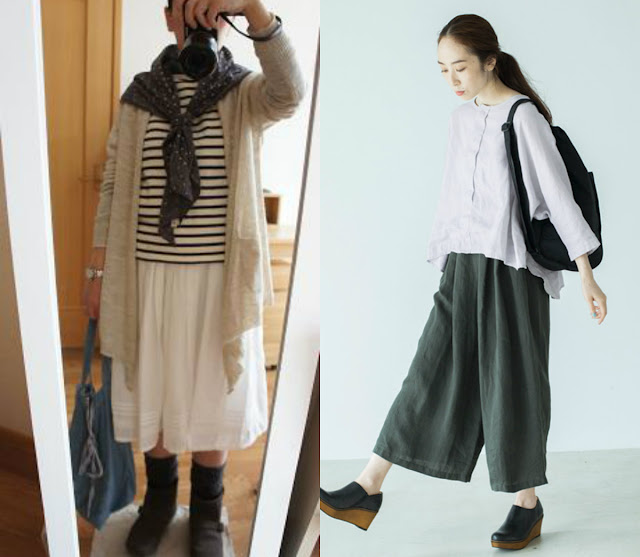 For ways in which it is similar to mori, things such as the use of natural fabrics, a natural color palette, some layering, loose clothing, and an a-line shape stand out. In fact, some coordinates often closely resemble mori coordinates, so that many who live in Japan and wear natural style use both tags to describe the style because of its similarities.

However, although natural style does have some similarities to mori, it has just as many differences that separate it from mori kei as a style. For instance, natural style focuses intently on fabrics above everything else. For example, to qualify as the style, the outfit has to be composed of natural fabrics. Linen is especially popular in this regard. This is different from mori where natural fabrics are certainly encouraged and praised, but not enforced. Additionally, the style is much more simplistic with a lot less layering, almost to a point of being a minimalist sort of style, as well as featuring more muted tones. I like to think of the style as a diluted version of mori. It shares the base similarities but has dulled it down to a more acceptable and mainstream style.

A fellow mori girl from the mori discord server, Willow, noted that natural style often resembles outfits from a Studio Ghibli movie. Although there is no way to say for sure, it could certainly be that the style is partially inspired by the popular films.

Willow described the fashion as "Ghibli heroine inspired," which I think is very accurate. Natural style certainly echoes the fashion of ghibli characters with the focus on loose clothing, natural colors and fabrics, and a folk-like silhouette.

Another fellow mori girl Britni also mentioned to me that the style also fits well with the popularity of the Moomin franchise in Japan. Certainly, the style does have a similar aesthetic to the show.


For more information on those who wear the style, I was recommended by Britni the accounts yoshiyoshi1009 and __sa.ki_ on instagram. Both accounts are lovely, and I would highly recommend checking them out if you are interested in the style. 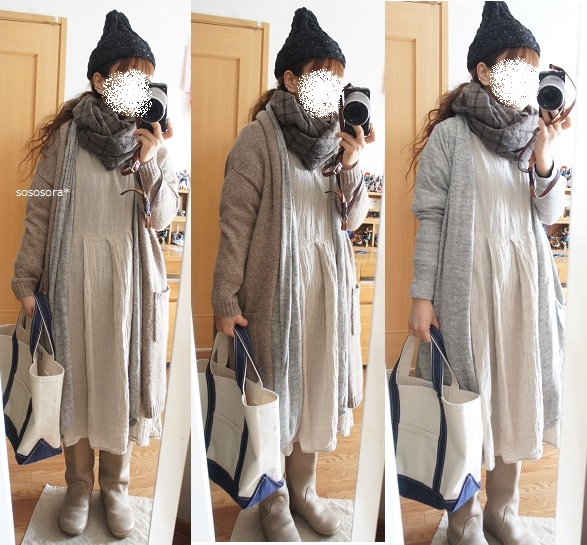 As natural style is not truly a "style," as already established, it has no aesthetic attached to the fashion. However, as a general trend, those who post pictures of themselves wearing this style seem to favor a more nature conscious lifestyle and enjoy some "mori-like" things, such as slower living or nature-based hobbies. However, this is not a requirement for the style, nor is it even directly attached.

Natural style is technically not connected to mori at all. However, I thought that due to the many aspects of mori that can be seen in the fashion, it is worth mentioning as a sort of modern successor to mori. It is not considered a sister style, or even under the mori umbrella, but it is similar enough to warrant some connection to the style in my opinion.

Have you heard of Japanese natural fashion? Would you ever consider wearing the style? Do you also think it is somewhat similar to mori, or do you think it shouldn't be used in connection to the style? I'd love to hear your thoughts in the comments below, and I hope you enjoyed this post!

Stay tuned for my next series of posts where I will be discussing official mori substyles!

Please do not interact with this blog if you are linked to NSFW or kink related content. Anyone is welcome to read, but I do not want my links shared or linked to any NSFW content. Any content found violating this will be removed by myself.
I would like to keep this blog public so that the most amount of people can access my information, so thank you for being understanding and respecting my boundaries so that this can remain the case.