Almost Mori: What is Mori Gyaru? 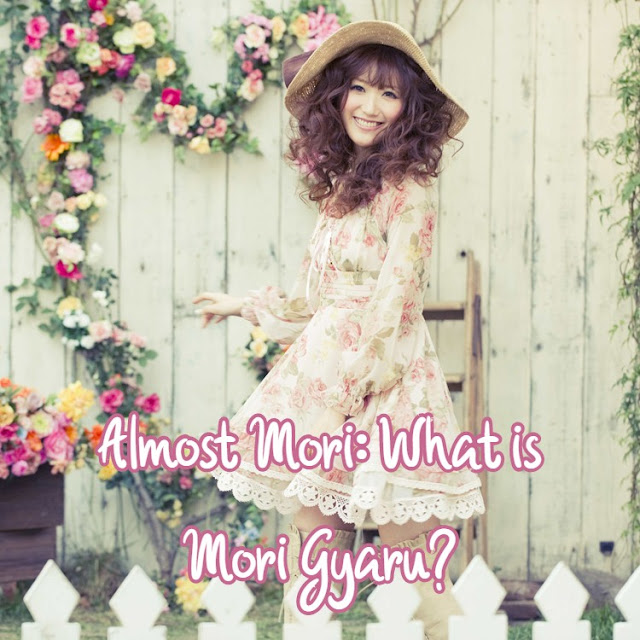 Welcome to the third post in the "Almost Mori" series! This time we will be taking a look at Mori Gyaru!

Mori Gyaru is another popular spin-off style of mori kei, but this style is unique because it is not just a spin-off of one fashion style, but rather a combination of two well-known styles: mori kei and gyaru. There are still a few good posts on the internet for extra reference on the style, such as the post by On the Streets of Sydney here, and also one in Portuguese here. There is also an actual blog run by a mori gyaru here that you can visit as well! However, the blog is now inactive, although it still has some decent resources posted.

Mori Gyaru is a somewhat more popular style than the last few styles we have looked at, in that it was actually able to make it to Harajuku streets and in magazines and became an actual microstyle of the gyaru scene. However, it was never quite as popular as mori kei, even at its peak. 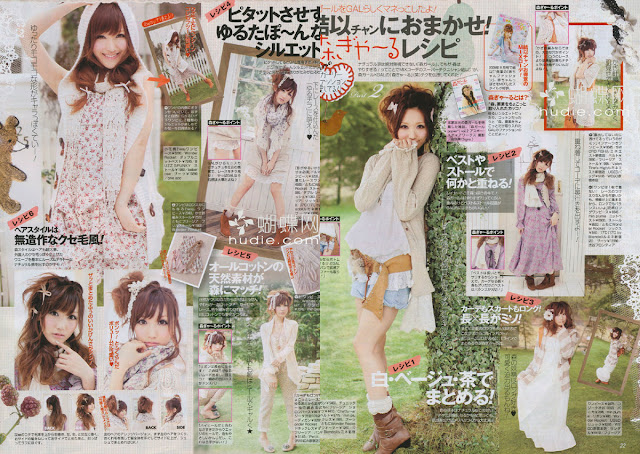 To understand "mori gyaru" we first have to understand "gyaru" itself. Gyaru is a style of its own, and as such has a much more interesting and detailed history than I can hope to get into in this post. For more information on gyaru itself, you can find a good resource here from Yabai. For the purposes of this post, I will simply give you a summary.

According to Yabai, "in [the] native Japanese language, the word gyaru actually means “girl”... in short, [gyaru] is a form of cultural grouping used to define girls that fit the specific definition [of] someone who has loud clothing that looks sexy and a matching loud personality. Gyaru girls are usually blonde [and] the gyaru culture was established during the 90’s."

The common stereotype of a gyaru is generally big, blond or dyed hair, spray tans, short-shorts, and lots of accessories. Long nails, bright colors and patterns, and of course, a materialist worldview, filled with shopping and clubbing, are also popular parts of the style.

However, gyaru is not always such a loud style, although the louder versions have generally been more popular. For instance, "amekaji, romantic gal, bohemian, and rocker [are substyles that] are extremely similar to the styles worn on a daily basis by girls from countries like the United States."


There are also more "cute" versions of the style, such as hime gyaru, that is "girls who are obsessed with dressing like a princess."


Mori gyaru was created as yet another of these gyaru subcultures. Just like other gyaru substyles, mori gyaru sought to combine the aesthetics of mori and gyaru into one style.

Mori gyaru and mori kei have quite a few similarities. Firstly, both styles focus on the natural color palette, although gyaru does tend to favor natural colors that evoke a floral theme rather than simply the broad term "nature". Lace is also a common element between the two, and of course layers, especially layered skirts, and florals patterns. 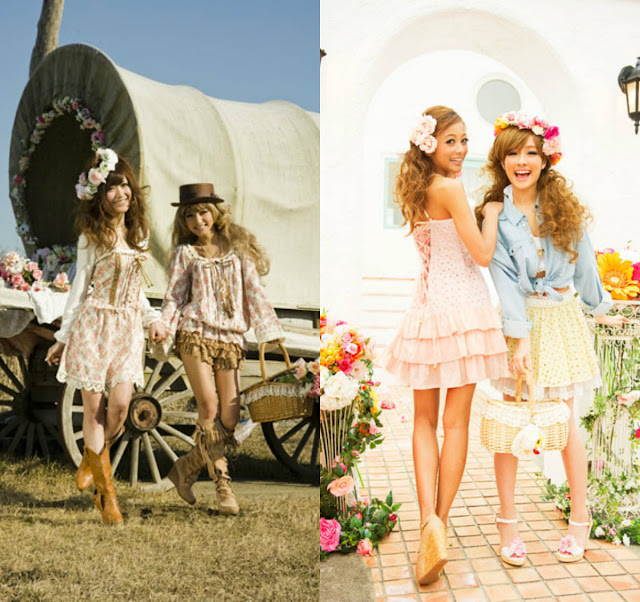 The style does deviate to contain more gyaru elements though. The most glaring difference is, of course, the shorter hemlines. While it is up for debate whether or not mori can or cannot have short hemlines, it is widely accepted that mid to long lengths are most popular in the style. In mori gyaru, it is rare to see hemlines past mid-thigh, and in general, hemlines are very short, echoing the traditional gyaru style. Other things that you might see exclusively in mori gyaru are high heels, more dramatic makeup looks (however they are usually more toned down than traditional gyaru makeup looks), bigger hairstyles that are more obviously styled, long gyaru nails, and more trendy items incorporated into coordinates (like shirts with open backs, or fuzzy uggs when they were in style.) 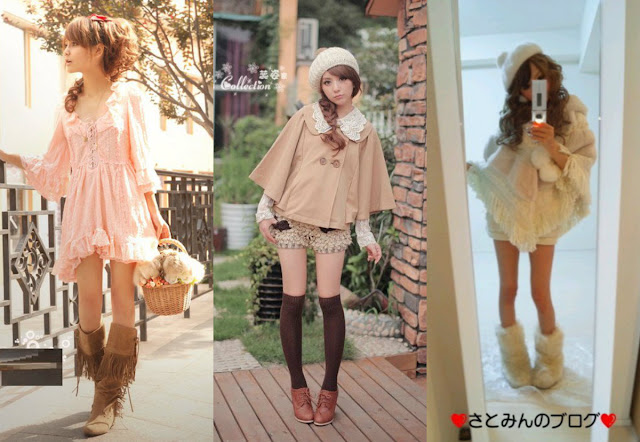 Mori gyaru did see some variations from this rule, and some mori gyaru coordinates did have a mori traditional mori silhouette, with more layers, flowier cuts that weren't as form-fitting, and longer hemlines occasionally making an appearance. 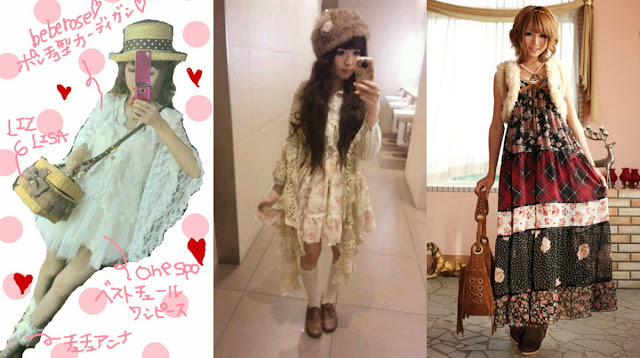 As previously mentioned, mori gyaru became popular enough at its peak that its aesthetic was seen in various fashion magazines, as well as gyaru magazines. However, its most notable appearance is most likely from the famous gyaru brand Liz Lisa, who released various clothing items inspired by the aesthetic of the style. 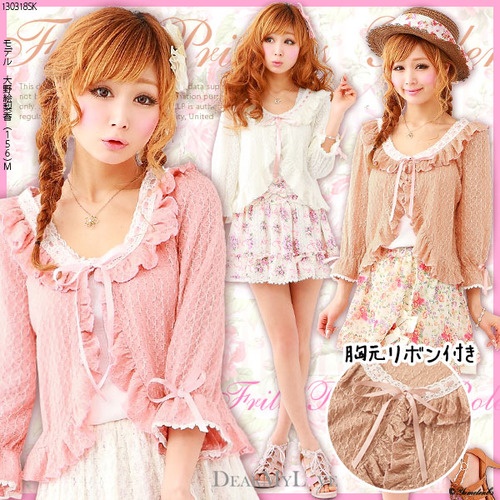 Mori gyaru is more of a fashion style than an aesthetic, but it does adopt some similarities to the mori kei aesthetic, as well as gyaru. For one, the style is definitely more materialistic, similar to gyaru. It has a bigger focus on brands and trends, and adopts some stereotypical gyaru behaviors like a gyaru's love for their cellphone, and going out with other gyaru friends to shop. But a mori gyaru may also have a soft side for nature and animals, and enjoy the small things in life, like a mori girl.

Where a mori girl wants to explore the forests, a mori gyaru probably feels more comfortable on a park or paved pathway, admiring the forest from a distance. Where a mori girl might forage for her own food and live in a cabin, and mori gyaru is more likely to decorate her city apartment with plants, and visit a trendy, local cafe with a natural theme.

Although mori gyaru was accepted by many in the international mori community to be a viable microstyle, and the title was claimed by a fair amount of people during its hype, there were other similar microstyles at the same time as its creation with the same aesthetic. Notably, versions of himekaji gyaru, and bohemian gyaru, both had similar styles, and brand pieces and photos of the fashions often overlap. Himekaji still remains the most viable natural-esque substyle of gyaru, and is still worn by some in the fashion today. It is important to note that, for some in the gyaru community, mori gyaru is just another name for these styles, and should not be considered a substyle or microstyle. However, for those in the mori community who wore the style, the term was widely accepted and used.
Additionally, it is important to note that the term mori gyaru was not really used in Japan. Although natural gyaru fashions were indeed popular for a time in Japan, inspired by natural fashion trends including mori, the term was specifically used as international term. It was mentioned briefly in a few magazines, but again, it never caught on and quickly died out. However, this does not discount its acceptance as a substyle. 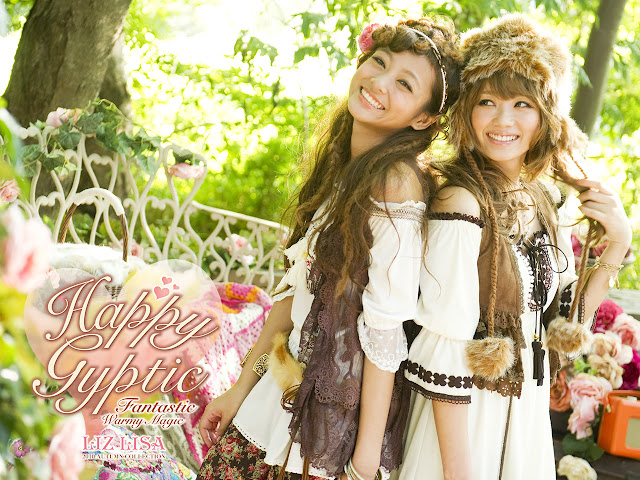 Due to its many similarities to mori kei, and the fact that it is a direct spin-off of the style that shares parts of its name, mori gyaru is also considered a sister style to mori kei by those within the mori community. However, unlike hama and yama kei, mori gyaru also developed its own unique community and maintained ties with its gyaru roots as well. Therefore, those who wore (and some who still wear) the style were often a part of multiple groups.

Today, mori gyaru is a much more obscure style and not well known. And in gyaru circles, where it never really caught on, the style has all but disappeared. However, in the mori community, its legacy still remains, and mori gyaru is still considered a fashion style that falls under the mori umbrella and remembered fondly by many mori folk.


Have you heard of mori gyaru? Would you ever consider wearing the style? I'd love to hear your thoughts in the comments below, and I hope you enjoyed this post!

Lagenlook
Posted by Kathryn at 8:41 AM